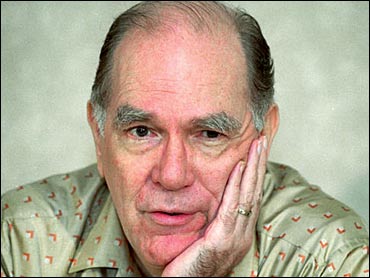 Perennial presidential candidate Lyndon LaRouche is back for an eighth try at the White House — and already has enough campaign cash to rival the fund raising of some mainstream Democrats in the race.

The 80-year-old economist has raised more than $3.7 million over the past few years, much of it through small donations and the Internet. Supporters handed out fliers at Washington subway stations this week proclaiming him the leader among Democratic hopefuls in the number of individual donations.

Now, as in the past, Democratic Party officials want nothing to do with him. Party leaders have refused to allow him onstage at candidate forums such as the debate this Saturday in South Carolina.

LaRouche refuses to go away. Though a minor party might offer a friendlier reception, LaRouche insists on running as a Democrat. He says he's in good health for his age, and jokes that there are probably Democrats who wish he wasn't.

"They hate my guts, they're a well-known faction, they've made it very clear over the years. This is the right wing of the Democratic Party," LaRouche said. "But the rest of the people I have no problem with. In politics, when you become serious, you become a threat to somebody. And they usually aren't too nice about it."

LaRouche first ran for president in 1976. He has tried again every election since then, including a 1992 campaign from prison while serving five years of a 15-year sentence for mail fraud and defaulting on more than $30 million in loans from campaign supporters.

LaRouche says his conviction "was a crime against me by corrupt elements of the government" trying to derail his political career.

"Not only is he not a registered voter but he has an extensive written record of racist and anti-Semitic opinions," Fowler said.

LaRouche spokesman Bruce Director confirmed that LaRouche isn't registered to vote, but noted that he doesn't have to be to run for president. LaRouche considers Virginia his residence, and Virginia law generally bars ex-felons from voting; Director said LaRouche planned to try to get his voting rights restored.

Director said LaRouche hasn't made any racist or anti-Semitic remarks.

LaRouche considers himself a "Roosevelt Democrat" and believes the country needs another New Deal — this time to move it from a consumer-based economy back to a manufacturing one.

Rather than punchy campaign themes, LaRouche likes to use phrases such as "reforming the floating exchange rate monetary system" on the campaign trail.

Some of his past proposals have included a quarantine of AIDS victims and the colonization of Mars. He has charged that Queen Elizabeth II is a drug dealer, and that Henry Kissinger and Walter Mondale are Soviet agents.

One of his best showings in the 2000 primaries came in Arkansas, where he collected about 21.5 percent of the vote. Arkansas State University political scientist William McLean said that was probably GOP voters crossing over to undermine Al Gore.

"I'm not running to become a president," LaRouche said. "I'm running to provide some leadership."

Donna Brozik, a 6th grade teacher from Winner, S.D., said that, though a Republican, she contributed about $250 to LaRouche because she likes his concern for enhancing the nation's infrastructure.

She said winning is not necessarily important: "I only voted for one president in life that was ever elected and he was a proven crook," Brozik said, referring to Richard Nixon.

LaRouche started fund raising roughly two years before others in the Democratic race, and as April began had collected more than several Democratic rivals, including Sens. Joe Lieberman and Bob Graham, former Vermont Gov. Howard Dean, Rep. Dennis Kucinich, former Sen. Carol Moseley Braun and Al Sharpton, most of whom started raising money in January. He said his campaign spends money as it comes in; he reported about $120,000 left on hand as of March 31.

LaRouche says he'll keep on running — maybe for the rest of his life.

"I have a dear friend, almost 92, who was beaten up marching across a bridge in support of Martin Luther King back in the fight for voters' rights," he said. "She is traveling around the world today ... She's doing her job, and if I have her vigor, when I get to be 91, 92, 95, I'll probably be doing the same thing."