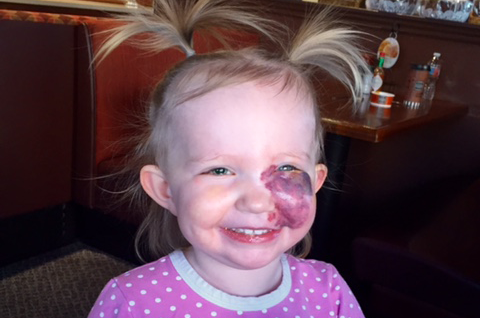 When Kelly Bossley dropped her 2-year-old daughter Lydia off at preschool in Denver last week, she immediately noticed the stares from other students.

Lydia was born with a port-wine stain birthmark on her cheek, and had recently undergone laser treatment that caused the color to flare up. Some of her classmates noticed, and started whispering to each other.

“The kids weren’t being mean, but were just curious and worried about her,” Bossley explained.

The situation would be enough to make any parent anxious to leave their child for the day, but that’s not why Bossley ended up driving to work in tears.

No, it was actually Lydia’s reaction to the gazes of her classmates that caused her mother to choke up.

As Bossley described in a post on the Love What Matters Facebook page, Lydia didn’t miss a beat. She calmly walked to her cubby, took out her favorite book, “Sam’s Birthmark,” and gave it to her teacher to read to the class.

The book, about a young boy who also has a port-wine birthmark, aims to teach children to embrace each other’s differences.

“I cried nearly the entire way to work,” Bossley wrote. “Not because I worry how her peers will treat her in the years to come but because I know this girl is gonna do big things!”

Bossley and her husband, Trent, have taught Lydia and her twin brother Nolan to explain the birthmark to people who may be curious. She believes this is what has given her kids “the confidence to speak for themselves” at such a young age.

That doesn’t mean Lydia has never had to confront harsh comments from people who don’t understand, such as being called “Purple Face.” But Bossley says Lydia is “tough as nails, and is going to be OK no matter what.”

Lydia’s story has since gone viral and gotten attention worldwide. Bossley says the response has been overwhelmingly supportive.

“The absolute best part of this story going viral is all the attention it has brought to vascular birthmarks. More awareness leads to greater acceptance, so it is my hope that Lydia’s story might help make things a little easier for others with physical differences.”

Through all of this, another mother was also deeply affected by Lydia’s actions — Martha Wardlaw Griffin, the author of “Sam’s Birthmark.” She and her husband were inspired to write the book when their son Barron was born with a port-wine stain.

“When I see posts like [this] I tear up!” Griffin commented on the original Facebook post. “There was not a positive message children’s book where the child character had a birthmark, so we wrote one. Connecting with birthmark parents from around the world has been truly amazing!”