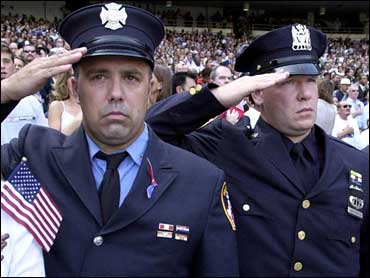 A minister with the Lutheran Church-Missouri Synod has been suspended for participating in an interfaith service at Yankee Stadium for the families of those killed in the Sept. 11 attacks.

The Rev. David Benke, president of the New York-based Atlantic District, was also ordered to apologize for mixing Christian and non-Christian views in violation of the denomination's constitution.

Benke has appealed the ruling, according to Alan Pollack, a lawyer for the board of directors of the district, which claims 42,000 members and about 100 congregations in the metropolitan area.

Twenty-one pastors and three congregations had filed a complaint against Benke soon after the stadium event on Sept. 23.

"To participate with pagans in an interfaith service and, additionally, to give the impression that there might be more than one God, is an extremely serious offense," wrote the Rev. Wallace Schulz, the Missouri Synod official who suspended Benke.

Benke, through Pollack, declined to comment Monday. But in a January statement responding to the complaint, Benke said he clearly prayed in the name of Christ at the service, which included Muslim, Roman Catholic, Jewish, Hindu and Sikh representatives.

He also argued that the event, organized by then-Mayor Rudolph Giuliani and featuring Oprah Winfrey, felt more like a patriotic gathering than a religious one.

"Not to make the primary human connections at a time of civic, national and global tragedy would be a great pastoral error," he wrote.

The complaint exposed divisions within the 2.6-million member denomination based just outside St. Louis.

Benke attended the service with the permission of the Missouri Synod national president, the Rev. Gerald Kieschnick. Kieschnick was asked to recuse himself from ruling on the complaint, so the decision fell to Schulz, a second vice president, said David Strand, a spokesman for the denomination.

Kieschnick planned to travel Thursday to St. Peter Lutheran Church in Brooklyn, where Benke serves as pastor, to discuss the ruling with area Lutherans. Strand says that if Benke loses his appeal, he will be ousted from ministry.