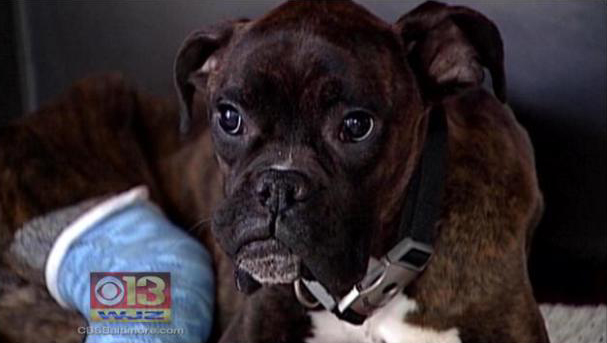 NORTH ANSON, Maine — Like his namesake, boxer Jack Dempsey, Dempsey the boxer dog is a survivor.

Against the odds and more than a week after he ran away in Maine, the pooch has been reunited with his overjoyed family in Maryland, CBS Baltimore reported.

Dempsey survived nine days without food in the bitter cold and had to have surgery after being hit by a car. But he is recovering, and owner Jamie Cyrway from Severn, Md., was able to get the reunion she was hoping for.

"Oh my goodness, I’m just so thankful.  Just so, so thankful," Cyrway said.

The family searched for days, offering a reward, putting up signs around the neighborhood and on Facebook.

"We went out on snowshoes," said Janet Boothby, Cyrway's mother. "We went out at night. We took my dog on trails. Jamie and I went through the woods. We had scent stations set up."

Cyrway, a single parent of three, had to go back to Maryland for work, but the search didn't stop there.

Nine days after Dempsey ran off, someone reported hitting a dog with their car just a mile or so from Christine Pierce's house. Pierce didn't know Dempsey or his family, but she had heard about the missing dog. She bundled up her kids and went out to go search.

"I followed the tracks that came down this way, and they went right into the building," Pierce said.

"He looked horrible. He was skinny," Pierce said. "He wasn't moving and when I saw him, I said, 'Dempsey, I found you! I can’t believe I found you!'"

His leg was broken and his heart was barely beating. But he was alive.

"It’s really a miracle," said Dr. Darren Richards of Madison Animal Hospital. “Nine days in the subzero temperatures that we had, and he's not a very big dog, so he’s lucky.  I think when she found him, he was probably within an hour or two of dying."

The family says they are very grateful to all the people who helped search for their dog. People even donated money to help pay for his surgery.

Pierce will receive a small reward for finding Dempsey.