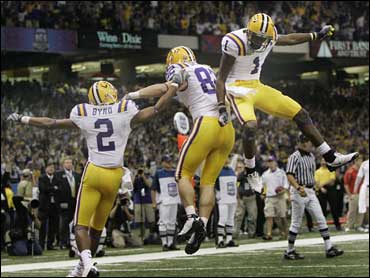 No. 2 LSU danced, dodged and darted its way into the end zone Monday night, turning the BCS national championship game into a horrible replay for No. 1 Ohio State. It was over early, with Matt Flynn throwing four touchdown passes in a 38-24 win.

Playing at their home-away-from-home in the Big Easy, LSU (12-2) became the first two-loss team to play for the title. Shouts of "SEC! SEC!" bounced around the Superdome as the Tigers won their second BCS crown in five seasons. They are the first school to win a second title since BCS rankings began with the 1998 season.

And in a season of surprises, this was hardly an upset: Ohio State once again fell apart in college football's biggest game. A year after the Buckeyes were routed by Tim Tebow and Florida 41-14 in the Arizona desert, they barely did better.

Jacob Hester bulled for a short touchdown, Early Doucet wiggled loose for a touchdown and All-American Glenn Dorsey led a unit that outplayed the top-ranked defense in the nation. Ohio State (11-2) had little to celebrate after Chris "Beanie" Wells broke loose for a 65-yard TD run on the fourth play of the game.

Yet while LSU got to hoist the $30,000 crystal trophy, certainly many fans around the country were peering into their crystal balls, wondering if someone else was worthy of the title. Southern California, Georgia, West Virginia, Kansas and Missouri all put on impressive shows in bowl games, and will be among the favorites in 2008.

The final Associated Press poll was to be released early Tuesday.

LSU became just the fourth favorite to win in 10 BCS championship games. Coach Les Miles probably got a little extra satisfaction, too. Though he turned down a chance to return home to Michigan, he did something his alma mater hasn't done recently - beat the Buckeyes.

The loss left Ohio State at 0-9 overall in bowl games against teams from the Southeastern Conference. The SEC delights in whipping Big Ten teams in what's become a rivalry that steams up fans on both sides.

The Tigers rallied from an early 10-0 deficit, taking a 24-10 lead that held up. Two big plays on special teams kept them ahead - they blocked a field goal, and later took advantage of a roughing-the-kicker penalty.

Flynn hit Doucet with a 4-yard toss with 9:04 left for a 31-10 lead and celebration was on in earnest. The Buckeyes made the score more respectable on Todd Boeckman's 5-yard TD pass on fourth down to Brian Robiskie, only to have Flynn come back and throw his second TD pass to Richard Dickson.

As the clocked down, Boeckman threw a 15-yard touchdown pass to Brian Hartline.

Ohio State was trying to win its second BCS title in six years, and add to the one that coach Jim Tressel captured by upsetting Miami 31-24 in double overtime for the 2002 championship.

For sure, the Buckeyes were perhaps the most-maligned No. 1 team in recent memory, with critics attacking them all season. Tressel gave his players a 10-minute DVD filled with insults hurled at them by television and radio announcers, hoping it would motivate his team.

Instead, the Tigers ravaged the nation's best defense and showed that maybe all those naysayers were right.

Known as a punishing runner, Wells got the game off to a quick start. On the fourth play from scrimmage, the Buckeyes' bruising back started left, made a nifty cut right and burst through the middle.

Wells was gone, off on the longest run of his career. And so much for SEC speed - Wells outran All-America safety Craig Steltz for a 65-yard TD.

Wells was welcomed by a familiar face once he got back to the sideline. Miami Dolphins receiver Ted Ginn Jr., wearing scarlet and gray Mardi Gras beads, knew all about early strikes. He provided Ohio State's only highlight in last year's BCS title game, returning the opening kickoff for a touchdown.

This time, Ohio State made it 10-0 on its next possession. Boeckman hit a wide-open Brandon Saine for 44 yards, setting up Ryan Pretorius' 25-yard field goal.

Only five minutes into the game, Ohio State and its all-brass band was blowing away the Tigers. LSU looked dazed and defensive coordinator Bo Pelini - who now becomes Nebraska's full-time coach

Fortunately for the Tigers, their offense started clicking. On a team full of flash, it was the steady ol' Hester who settled down LSU.

First, he barreled into All-America linebacker James Laurinaitis for a short gain. Both players are the rugged type and in a nice show of sportsmanship, Laurinaitis - whose dad, Joe, once starred as "Animal" in the "Legion of Doom" wrestling tag team - helped up Hester.

Hester broke off a 20-yard run on the next play, and LSU eventually got a 32-yard field goal from Colt David that made it 10-3.

That score late in the first quarter seemed to jazz everyone in purple and gold. The Tigers zoomed into fast motion, the band's Golden Girls suddenly put more bounce in their step and thousands of fans started screaming even louder.

Flynn also seemed to recognize exactly what Ohio State was trying to do. LSU quarterbacks spend a lot of time with an Xbox, playing a custom-made video game to read defenses. Apparently, what worked on the screen did even better on the field.

Two big penalties against Ohio State helped set up Flynn's 13-yard touchdown pass to Dickson, who somehow found himself uncovered. Flynn punctuated the strike by hollering, giving a wild fist pump and putting up both hands to signal TD.

Tied at 10, the Buckeyes counted on Wells. He delivered one of the season's best stiff-arms on a 29-yard romp, and Ohio State seemed poised to retake the lead.

As Ohio State trudged off the field and LSU sprung on, it was all over. It only took a while to confirm it.

LSU turned to another of its five dangerous tailbacks, and NCAA sprint star Trindon Holliday zigzagged closer to the goal line. Flynn's perfect pass to Brandon LaFell in the back left corner of the end zone put the Tigers ahead 17-10.

Then, it was time for LSU's defense to make the big play. Cornerback Chevis Jackson intercepted Boeckman's loss toss and streaked 34 yards down the right sideline.

The Tigers moved to a first-and-goal at 1. On third down, Hester plunged up the middle and it was 24-10 with four-plus minutes left in the first half.

No doubt, this was a replay the Buckeyes hoped to avoid. Last January, the top-ranked Buckeyes got blitzed in the BCS title game, falling behind 34-14 at halftime to Florida.

On this night, the Buckeyes were equally humbled. Done in the locker room, offensive coordinator Jim Bollman led a silent, single-file line of coaches through the press box and back to their booth for the second half.