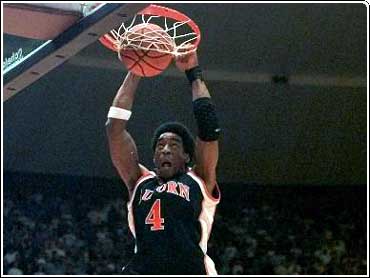 It was the defense that got the credit for No. 25 LSU's 83-68 victory over No. 9 Auburnon Wednesday night.

Jabari Smith added 18 points for LSU which earned its second victory over a Top 10 team this season and came up with the second most points scored against Auburn this year. Eighth-ranked Tennessee beat the Tigers 105-76, but Auburn had held its opponents to an average of 59.8 points a game. LSU also beat Oklahoma State when it was No. 11.

"I thought LSU just really physically whipped us early," Auburn coach Cliff Ellis said. "I thought that their inside people took it right at us early."

Auburn (19-4, 7-3 Southeastern Conference) never found a rhythm against an aggressive man-to-man defense that limited the Tigers to 35 percent shooting from the field. Porter, who averages 14.5 points a game, was held to 10 points before he fouled out with six minutes left.

"That was all Coach was stressing for the game get on Chris tight and get him in four trouble and that's what we did," Smith said.

LSU shot 55 percent from the field and outrebounded Auburn 39-37.

"Our team continued to shoot the ball well from the floor," LSU coach John Brady said. "We got the ball at critical times where we needed to get it and we had some good play from our bench."

Doc Robinson of Auburn had 17 points on 5-of-9 shooting from 3-point range.

"We got out-executed in every area by LSU," Porter said. "We came in here and they were ready for us."

The victory brought LSU within 1 1/2 games of first-place Auburn in the SEC West.

It was just the sixth time this season Auburn trailed at halftime.