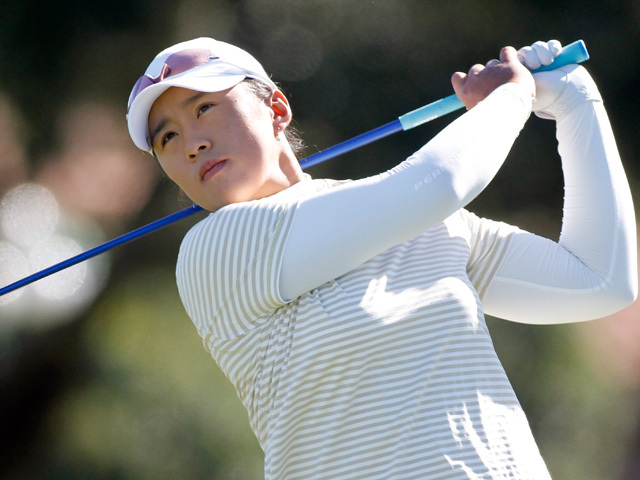 For Da Vinci it was the Mona Lisa, for Davis it was "Kind of Blue." For the five LPGA Tour players vying for top honors this week, the culmination of the 2010 season all comes down to this — the LPGA Tour Championship.

Set in Orlando Fla., the season finale has all the makings of an epic finish, with nine of the 10 top-ranked players in the world in the field and a cut-throat format, in which the lowest 70 scores and ties move on after 36 holes until the final cut of the lowest 30 players and ties remain. Needless to say, each player is forced to play each shot as if it were her last to claim the top spot in the world rankings and the coveted Player of the Year honors.

But the challenges of Grand Cypress Golf Club, not to mention the waning hours of daylight, have proven to be a test for many of the Rolex Rankings' top five seeds: Jiyai Shin (No. 1), Suzann Pettersen (No. 2), Cristie Kerr (No. 3), Yani Tseng (No. 4), and Na Yeon Choi (No. 5).

All players trail Amy Yang who sits atop the leader board at 7-under par. Shin finished second round play T66 at 8-over par, Tseng is in the clubhouse T33 at 4-over par, Pettersen finished the day respectively T20 at 2-over par, leaving Tour veteran Kerr in contention at 2-under par, T5.

All players know what's at stake, each wanting it as bad as the next. It's been ten years since a player other than LPGA Tour stars Lorena Ochoa and Annika Sorenstam have taken the title.

"We have got big pressure," said Shin, who, along with Choi, could become the first Korean to win Player of the Year.

"It will be my dream come true if I get the award," said Choi.

Kerr could also etch her name in the history books if she captured the elusive title to become the first American to win the award since Beth Daniel in 1994. Pettersen would need to make ground on moving day and snag the Tour Championship in order to win her spot as Player of the Year. If Tseng can come from behind, she would be the first winner from Taiwan to hold the Rolex Rankings No. 1 spot come Monday.

The ranking switches have seemed like a game of musical chairs since Lorena Ochoa and Annika Sorenstam bid farewell to the Tour. The top spot has changed nine times among Ai Miyazato, who began play ranked 6th in Rolex Rankings, Shin and Kerr.

"It is exciting to have the chance, because in years past, it's been pretty much over by the half-year mark," said Kerr.

And despite the fact that the top five women have combined to win 14 of the season's 25 events, including three of the four majors with Kerr taking home the LPGA Championship and Tseng winning the Kraft Nabisco Championship, Player of the Year remains the most desirable — especially for Kerr.

"For me, player of the year is kind of it," she said. "I think it's the yearlong culmination of you're the best player, this is what it was, these are the points, this is a point toward the Hall of Fame."

Good luck ladies, and may the best woman win.