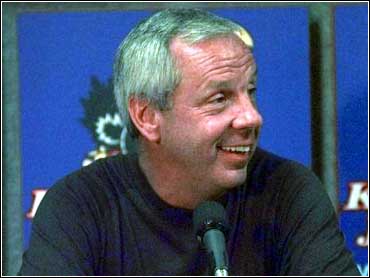 The softest of soft sells kept Roy Williams at Kansas.

Neither money nor power nor any other inducement lavished on high-profile coaches holds any attraction for this plain-spoken native of North Carolina.

His greatest thrill, next to coaching basketball, is sinking a birdie putt. His strongest word ever spoken in anger is "dadgummit."

His No. 1 value is loyalty.

Athletic director Bob Frederick and chancellor Robert Hemenway knew all that and more. So when Bill Guthridge retired as North Carolina basketball coach, they devised a simple and brutally effective strategy:

Let him make up his mind in his own good time. Do not crowd him. Most certainly, do not insult the man by offering anything beyond what he already earned in a five-year rollover contract.

"Absolutely no material inducements were offered," Hemenway insists. "He got exactly the same contract today that he had yesterday."

They never warned of the danger of coaching in Dean Smith's awesome shadow, or recalled what a risk they'd taken 12 years ago by hiring an unknown North Carolina assistant coach.

What they counted on was his love for Kansas and, most of all, his love and loyalty for his players.

Their strategy in place, Hemenway and Frederick waited for seven nervous days. They were irritated, and worried, that North Carolina fans and officials seemed to assume Williams already belonged to them.

How could he say no to Smith and his beloved alma mater?
said. "What are Roy's personal and professional goals? What does the university believe the relationship between first-rate academics and first-rate athletics ought to be?"

After a coupe of hours, Williams stood up.

"If I decide to stay," he asked, "could we get a plane to North Carolina in time to pick up Wanda and (daughter) Kim and get them here for the news conference?"

Hearts raced. Why, yes they could. They most certainly could.

"Before I make my final decision, I want to walk the KU campus one more time and see what my heart tells me," Williams said.

It was swelteringly hot, about 92 degrees, and humid. The campus was nearly deserted. He stopped at a campus landmark fountain, took off his shoes and socks and dangled his bare feet in the cool water.

A short time later, he walked back to his office and called Frederick.

Within minutes, a university plane was cranking up. Williams was placing a call to Smith for what he said later was "as painful an experience I could have."

At 9 o'clock, while Wanda and Kim smiled at him from the back of a hot, crowded room and a beaming Frederick sat next to him, Williams faced the news media.

"I'm staying," he said with a big smile.