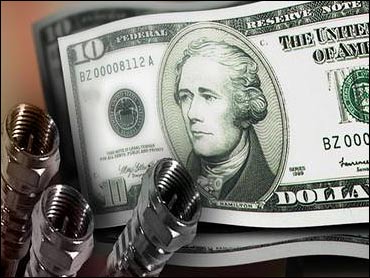 Monopolies in many cable TV markets could end under House-passed legislation that supporters said would increase competition and drive down prices.

The far-reaching telecommunications legislation, passed 321-101 Thursday night, would encourage telephone companies and others to enter video markets by scrapping the time-consuming system where prospective providers must negotiate individually with every locality.

"This legislation can increase competition not only for cable services, but also unleash a race for who can supply the fastest, most sophisticated broadband connections that will provide video, voice and data services," said House Energy and Commerce Committee Chairman Joe Barton, R-Texas.

Barton noted that because of the impediments created by the local franchising system, the United States doesn't even rank in the top 10 worldwide in broadband deployment. "This bill should change that statistic," he said.

The issue now moves to the Senate, where the Senate Commerce, Science and Transportation Committee is to vote on its version of the bill later this month.

While there was wide agreement on the principle of increasing competition, the House was divided over the issue of "net neutrality," or how to ensure that telephone, cable and other Internet providers don't discriminate against competitors or users by limiting access or charging higher fees.

The Barton bill gives the Federal Communications Commission authority to enforce net neutrality principles and set fines of up to $500,000 for violations.

Many Democrats, backed by a diverse lobby of content providers such as Google Inc. and Microsoft Corp., and users ranging from religious broadcasters to liberal bloggers, said this wasn't enough to maintain the Internet's freewheeling openness.

Rep. Edward Markey, D-Mass., offered an amendment stating that broadband network providers must not discriminate against or interfere with users' ability to access or offer lawful content. Opponents argued that it would create government regulations controlling the Internet and make it more difficult for service providers to invest in new high-speed technology. It was defeated 269-152.

"Tilting the cost burden onto end users, which would be the inevitable result of neutrality regulations, will only delay much-needed broadband deployment," said Mike McCurry, co-chair of Hands off the Internet, a coalition of telephone, business and small government groups.

The White House said in a statement that it supported the bill and its language on video franchising. But on net neutrality, the administration said the FCC has the power to address potential abuses.

"Creating a new legislative framework for regulation in this area is premature," the statement said.

Democratic opponents also said the measure did too little to ensure that broadband services would be extended to lower income and rural areas.

Markey predicted that telephone companies would open services in wealthy communities, providing competition for services and lower prices but that it would ignore poorer areas that would be stuck with high prices.

"This bill is about cable rates and what we know today is that cable rates are too high in America," said Rep. Albert Wynn, D-Md., another member of the Congressional Black Caucus.

Rep. Fred Upton, R-Mich., who heads the telecommunications subcommittee, estimated that people could save $30 to $40 each month if given a choice in video services.