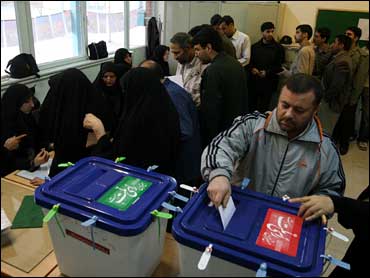 Voters at a Teheran mosque Friday morning were the stars of Iran's democratic show for the world's media.

But as soon as CBS News correspondent Elizabeth Palmer asked one man why authorities had banned all the reform candidates, a plainclothes policeman appeared, and tried to censor his answer.

He needn't have bothered: "We love our leader," the man said.

He is one of the regime's diehard loyalists, who wouldn't dream of criticizing - or casting a vote for anyone else.

Critics see the overall low turnout as a sign of frustration with a vote that hardliners allied with President Mahmoud Ahmadinejad are expected to dominate.

Lineups did develop at a few spots in the capital, but they were at major mosques where most voters were expected to back pro-Ahmadinejad candidates.

But at dozens of polling stations in schools, universities and other mosques around the city, voters dribbled in slowly.

Most supported reformists, bringing in newspaper lists of reformist candidates for Tehran's 30 seats.

Iran's reformist movement, which seeks democratic changes at home and better ties with the West, has largely been sidelined in the race after most of its candidates were barred from running by Iran's clerical leadership.

With reformists crippled, the race is instead a test of Ahmadinejad's support among conservatives, some of whom have been disillusioned with the president since he came to office in 2005. Ahmadinejad could face a challenge from moderate conservatives in presidential elections next year.

Palmer reports the election is really a contest "between the hard-liners, and the not-quite-so-hard-liners," leaving thousands of young Iranians who do crave real change disillusioned and disinterested in the vote.

The Guardian Council - an unelected body of clerics and jurists - disqualified around 1,700 candidates, mostly reformists, on the grounds they were insufficiently loyal to Islam or Iran's 1979 revolution. The reformist candidates who remain are mostly little-known to the public.

Critics say Ahmadinejad has fumbled efforts to fix the economy of this oil-rich nation - hit by high inflation and unemployment and fuel shortages. They blame his fiery manner for worsening the standoff with the West, bringing on U.N. sanctions over Iran's nuclear program.

The key question will be the performance of Ahmadinejad's conservative critics, a year ahead of presidential elections when he could face a challenge by moderate conservative candidates, many of whom call themselves "modernizers", reports Palmer.

A strong showing Friday by the Inclusive Coalition of Principlists - a slate of candidates that includes conservative critics of the president - would be a sign of Ahmadinejad's waning support.

The list allegedly has the support of Tehran's popular mayor, Mohammad Baqer Qalibaf, a conservative who is often cited as a possible rival to Ahmadinejad in the 2009 election.

Another key candidate in Friday's race is Ali Larijani, who stepped down as Iran's top nuclear negotiator because of differences with Ahmadinejad. Larijani, who is Supreme Leader Ayatollah Ali Khamenei's personal representative on the Supreme National Security Council, is running for parliament from the city of Qom and has sometimes also been cited as a possible presidential candidate in 2009.

(AP Photo/Alaa al-Marjani)
Palmer says Larijani, seen at left, has indicated a desire to try and mend the virtually non-existent diplomatic relationship with the West, including the United States government, should he come to power.

At a number of polling stations at mosques in southern Tehran, there were lines of 50 to 60 people soon after voting began Friday morning, with a steady flow of people coming in throughout the following hours.

Many filled their ballots by picking names from print-outs of the United Front of Principlists, a slate dominated by Ahmadinejad allies.

Mustafa Rajabi, a 33-year-old government worker, said he voted for backers of the president. "This is my duty to keep the country stable," he said, standing with his wife, who wore a black chador robe draped over her head and body, and their two children, too young to vote.

In contrast, polls in several schools of northern Tehran and at Khajeh Nasir University were all but empty early Friday, with 5 or 6 people in each.

"Many students and activists have been under pressure because of their political activities," said Reza Kolahroudi, a 22-year-student who showed up to vote for reformists. "I hope reformists can change the current situation."

Some 4,500 candidates nationwide are running for parliament's 290 seats in Friday's vote. But reformists say they don't have candidates in around 200 of the races.

Supreme leader Ayatollah Ali Khamenei has backed conservatives, saying earlier this week that Iranians should elect anti-U.S. candidates "whose loyalties are to Islam and justice."

The disqualifications have divided reform supporters, some of whom have decided to boycott the vote. But reform leaders are pressing them to go to the polls, hoping to at least build a strong minority bloc, rather than the handful of seats they now have.

Former President Akbar Hashemi Rafsanjani, a powerful member of the clerical leadership seen as a top rival of Ahmadinejad, tried to convince the boycotters to vote.

"To be reluctant and say why we should participate in the election is a kind of self-destruction," said Rafsanjani, a conservative who has grown closer to reformists. "This will lead to the absence of their favorite candidates in the council," he said, according to the state news agency IRNA.

Turnout among the estimated 44 million eligible voters is a key issue. In 2004 elections, which were swept by hard-liners after most reform candidates were barred from the race, turnout was around 51 percent. In previous votes won by reformists, it was closer to 80 percent. Reformists say they have the support of a silent majority that, if it votes, swings elections to them.

Outside mosques, young boys were urging any reluctant passers-by to come in and vote for conservatives.

Many people were more concerned with shopping, packing malls and shops on main street to prepare for the Iranian New Year, Nowruz, which takes place next week. Sherine Faraji said she might vote in the afternoon after shopping.

"If I get to the polls, I'll vote for reformists. They don't bother women," said Faraji, who wore a tight-fitting jacket and a colorful headscarf that showed much of her hair. Conservatives seek to enforce a stricter female dress code covering the entire hair and hiding the body from head to toe.

Reformists held parliament from 2000 to 2004. During that time, they loosened Islamic social restrictions. But hard-liners, who control the unelected clerical bodies whose powers trump the parliament and president, prevented deep political change.

If reformers fail to win a significant parliament minority in Friday's vote, it will illustrate the endurance of conservatives' lock on power, with the clerical leadership able to thwart any reformist comeback.