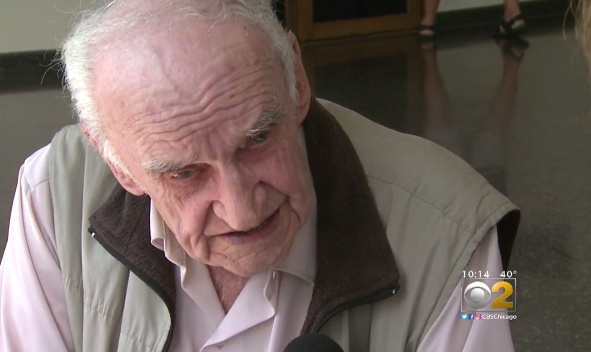 It’s called the “Fake Love Scam,” and it’s heartbreaking: Younger people woo and even marry elderly victims -- then strip them of everything they have, CBS Chicago reported.

The scam is a legal nightmare for victims and their families.

Aloysius Mack, 92, has been diagnosed by a psychiatrist as having dementia. That psychiatrist filed a legal document saying Mack is “partially incapable of making personal and financial decisions” -- decisions like those he made with Sophie Miller.

“I think she was stalking me and she came out of nowhere,” recalled Mack, who met Miller at a suburban McDonald’s.

“She came over and sat across the table from me,” Mack said. “She seemed honest to me at the beginning.”

In the end, the Cook County Public guardian charged that Miller targeted Mack because of his disabilities, in a scam his office calls “The Fake Love Scam.”

“People fake that they’re in love with people,” says Cook County Public Guardian Robert Harris. “They marry them and scam them out of their money.”

Last March, Miller brought Mack to Chicago City Hall to get married and then dropped him off alone at his home.

The marriage creates legal hurdles for attorneys now trying to undo both it and the financial damage Miller allegedly orchestrated.

The public guardian’s office alleged in court filings that Miller got Mack to pay $80,000 for a now-shuttered laundromat business. Mack also bought her a $40,000 van and put her on his bank accounts totaling about $335,000. She also got him to change his will so she would inherit Mack’s home in Schaumburg, in northeastern Illinois, valued at $260,000.

“She scammed me,” Mack said. “And the worst thing of all she stole my hard-earned life savings.”

In another case, 79-year old Benita Manalo, who has severe dementia, married her caretaker, Phil Cantillas, who is 28-years her junior. Shortly after the marriage the public guardian charged in a petition that Cantillas “began to funnel thousands of dollars belonging to Manalo to his bank account in the Philippines” and to friends in the U.S.

Altogether, the Public Guardian charged Cantillas either “spent, wired, mailed or gifted” more than $65,000 of her money.

Cantillas denied any wrongdoing but settled the case by agreeing to have judgment entered against him for the money. He could not be reached for comment.

The public guardian said the so-called “fake love” or “marriage scam” is a growing problem.

“Baby Boomers, as we get older, we’re going to see more of these types of cases,” Harris said. “These things are really serious because they will take all of their money and will leave them sitting in the living room in their underwear ... they’ll be gone in the wind.”

Now, Mack’s family is trying to pick up the pieces.

“He just did whatever she said. He said he was vulnerable, he said I was a sitting duck and he fell for everything she said,” Mack’s great-niece Nancy Hunter said. “He was so lonely and that’s the bottom line.”

Mack’s great-niece was appointed his guardian this week and a protection order was entered prohibiting Miller from contacting him. The Public Guardian’s Office was able to get back $40,000 of the $80,000 he paid for the laundromat.

Now attorneys are trying to get the marriage annulled so they can undo all the legal documents Mack signed tying his finances to her. Miller could not be reached for comment.