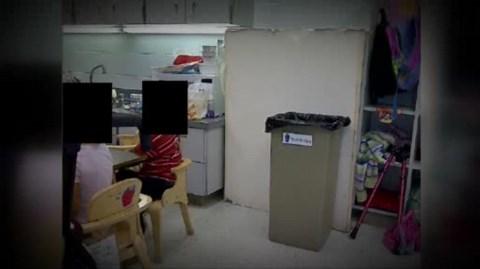 JACKSONVILLE – A Jacksonville school is accused of punishing special-needs students by putting them in a box made of drywall.

CBS Miami reports the parents of a child with cerebral palsy are suing the school district, claiming hundreds of students were abused in the classroom and on school buses.

The lawsuit says students knew it as “jail.”

A 2012 photo from inside a Love Grove Elementary preschool classroom shows a piece of aged drywall.

The 37-page lawsuit claims it’s a piece of a “discipline box” -- and a then-3-year-old child with cerebral palsy was one of the students placed in it.

Bates represents the family of the child suing Duval schools over claims of abuse and civil rights violations.

Bates claims the district failed to properly train its special-needs teachers and staff.

“The school administration knew about it, teachers used it,” Bates said.

The document explains, between August 2011 and June 2012, there were 304 instances of seclusion on 120 students -- 70 percent of which have emotional-behavior disorders.

Records show Bates’ client transferred to a different Duval County school and encountered additional problems there and on the school bus too.

“I think again you have to look at every individual situation and what are the facts of those situations. I think when we look at the way in which we serve the ESE students we’ve made huge strides over the last four years,” said DCPS Superintendent Dr. Nikolai Vitti.

The lawsuit also claims staff forced the student’s legs into the wrong braces, twisting his feet and causing bruising, sores and bleeding.

The school district released a statement saying it could not comment on pending or anticipated litigation.