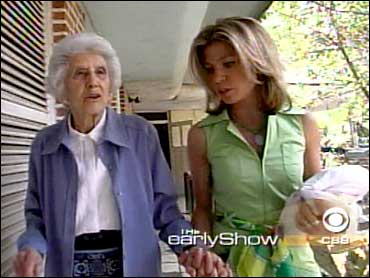 The Early Show national correspondent Tracy Smith spent her summer vacation in Rwanda. The main reason she went was to see an old friend who is doing something most people only wish they could: taking care of orphans.

In a tiny corner of the tiny African country, Smith observes, a small miracle unfolds every day. The Imbabazi Orphanage is home to more than 100 children who, for reasons often too horrible to mention, have nowhere else to go.

Imbabazi's founder and guardian angel is Rosamond Carr. At an age when many people are well past retirement, Carr is still on the move.

"We're leaving in November," she tells Smith. "We're going up to my farm. I've built two beautiful buildings there. One of them was paid for by Columbus, Ohio."

Private donors keep her in business; the children keep her alive. Carr has lived 93 years, and how full those 93 years have been.

She was born Rosamond Halsey, the daughter of a New Jersey banker. She grew up in the roaring '20s with a taste for fashion and parties. In 1942 she married British explorer Kenneth Carr, who brought her on an expedition along the Congo River. Her marriage to Kenneth fell apart a decade later, but Rosamond Carr couldn't bring herself to leave Africa and she got a job managing a flower farm.

In 1972 Carr met another American woman in Rwanda, Dian Fossey. Their sometimes stormy relationship was featured in the movie "Gorillas In The Mist," with Julie Harris as Carr.

"She'd just come and move into my bedroom, and I'd move into the guest room," Carr says. "I wasn't thrilled."

The real-life Rosamond Carr never remarried and lived quietly on her farm until 1994, when the world's attention would turn to her beloved Rwanda with anguish and horror.

In April 1994, a long-simmering hatred between Rwanda's two main ethnic groups — the Hutu and the Tutsi — exploded into violence. Hutu militia rounded up every Tutsi they could find and turned Rwanda's streets into scenes of utter savagery. On Carr's farm, half of the staff was Tutsi, and the Hutu hunted them down.

Carr says she had a band of 20 children come to her house looking for ethnics to kill. "And they were kids I knew," she says. "One boy was, perhaps, 17 and the youngest was 12. They were just kids. And they had clubs."

Within hours, Carr's idyllic flower farm was the scene of a bloodbath. She escaped and was evacuated, reluctantly, to the United States.

"In fact, by the time I got to California and started looking at CNN, I knew I had to come back and see what had happened to my house and my friends," she says.

And some of what she saw on TV would change her life. One report told of orphaned children living in a squalid refugee camp just over the border in what was then Zaire.

"I thought, 'That camp is only 10 kilometers away from me,' " Carr says. "I could walk there and bring these babies back and take care of them. And as I'd not had children of my own, and always wanted to, it was a wonderful opportunity for me."

A few weeks later, 82-year-old Rosamond Carr returned to Rwanda and began to take in orphans — first a dozen, then, after a massacre at a camp, a larger group.

"I got 26 children at that time, and every one of them had seen their families killed," she says.

In a country consumed by evil, there was now a tiny haven of humanity: Orphanage Imbabazi.

By 1999, Carr had well over a hundred orphans under her roof — all of them were cared for and all of them felt loved.

When I visited her again this past July, the faces were different but the feeling at Imbabazi was the same.

"Every child that comes, the first thing they want is for someone to put their arms around them and hug them," Carr says. "And really hug them; make them feel 'I love you.' And the second thing is to feel that they can stay, and that they're safe here."
For many years, Carr grew flowers for a living. In a way, she still does with seedlings that have sprung to life against all odds. Carr has outlived most of her friends, but she will never be alone.

"You always miss the people you truly love," she says. "But there are a lot of kids to live for."