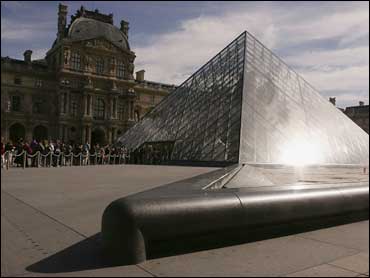 The Louvre Museum in Paris had a record number of visitors in 2005, with successful soirees for young people, crowd-pleasing exhibitions and promotion from "The Da Vinci Code," a top administrator said Tuesday.

About 7.3 million people visited the art museum in 2005, up from 6.7 million in 2004 — the previous record — general administrator Didier Selles told The Associated Press. Definitive 2005 figures are expected in coming weeks.

Selles said Dan Brown's mystical thriller "The Da Vinci Code" was in part responsible for drawing fans to the Louvre, though likely "not in gigantic proportions." Some travel companies offer "Da Vinci Code" tours that make stops at the Louvre.

The museum expects more dramatic results starting this spring, when Oscar-winning director Ron Howard's movie based on the novel debuts.

"There is perhaps a 'Da Vinci Code' effect, but in my opinion it will be truly stronger when the film comes out," Selles said in a telephone interview.

The movie stars Tom Hanks and Audrey Tautou, and was shot partly in the Louvre. In one of the story line's opening scenes, the Louvre curator is murdered and discovered naked, arms and legs outstretched, with a five-pointed star drawn on his chest in blood. The murder leads to the search for the so-called Da Vinci code.

The movie's producers are considering hosting the European premiere for the film at the Louvre, but they also might opt for the Cannes Film Festival in May, Selles said.

Another factor in the booming attendance was Friday night soirees that are free for those under age 26. The Louvre also made efforts to cut down on waits for visitors.

"It is rare today, except in very, very crowded periods, to have to wait more than 15 minutes to get into the museum, with (lines for) the coatroom included," Selles said. More galleries have also been opened up to the public. In 2001, 25 percent of the Louvre's rooms were closed, compared to 13 percent now.

Two successful exhibits in 2005 included a show on Romanesque art from France, which drew 205,000 visitors, and a retrospective on the Romantic painter Anne-Louis Girodet, which brought in 150,000 people and is traveling next to the Art Institute of Chicago, the Metropolitan Museum of Art in New York and the Montreal Museum of Fine Arts.

About one-fourth of everyone who visits Paris makes a stop at the Louvre, Selles said. One-third of Louvre visitors are French, and Americans are next, at about 18-20 percent.

In 2004, Chinese tourists made up 4 percent of visitors — for the first time, ahead of the Japanese, with 3.5 percent.