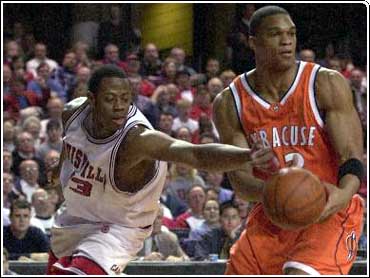 "When you have 22 assists, you're getting the ball to the open man and getting some good shots. That's the first thing I look at," Crum said following his squad's 82-69 victory Thursday night over No. 4 Syracuse.

"We went for a long stretch in the last few weeks with only 12 or 14 assists. Twenty-two tickles me to death."

Tony Williams scored 20 points and Marques Maybin added 16 as the Cardinals (13-9) shot 58 percent from the field to hand the Orangemen their second straight loss after opening the season with 19 wins.

The victory also was Louisville's fourth over a ranked opponent. Top-ranked Cincinnati is the only ranked team to beat the Cardinals this season.

"The guys were confident and I was confident," Williams said. "I told the guys on the bus at Memphis that these guys were vulnerable."

"They just caught us on a night that we were playing well. We were communicating and passing the ball well."

Louisville made 34 of 59 shots and got outrebounded by only one, 36-35, by the much taller and more physical Orangemen. Syracuse shot only 43 percent, making 5 of 19 3-pointers and only 8 of 17 free throws.

"We're not playing with the energy we were before," Syracuse coach Jim Boehei said. "Louisville took advantage of that and beat us down the floor. We have a size advantage but we aren't taking advantage of it."

"When a team shoots this well, you have to give them credit. But the defense also has to take some of the blame. We just have to play better, and I think we will."

Leading 32-24, a putback by Williams and a layup by Gaines forced a Syracuse timeout with 6:53 to play in the first half. Nate Johnson's three-point play with 53 seconds remaining gave the Cardinals a 46-36 halftime lead.

Louisville shot 61 percent in the first half and outrebounded the Orangemen 18-15.

"We knew we had to rebound and stressed that before the game," said Louisville center Dion Edward, who finished with nine rebounds. "We thought we could beat this team if we played our game."

The Cardinals led 64-52 with 10 minutes to play. An 8-0 Syracuse run, capped by a thunderous dunk by Thomas, cut the margin to four points with 5:26 to play.

But a 3-pointer by Gaines and a jumper by Edward put the Cardinals back up by nine and dashed any hopes of a Syracuse comeback.

"We did a good job coming back but then they made that three to push the lead back to seven," Boeheim said. "That was the key shot of the game. That made it really tough the rest of the way."

Louisville hit five of six free throws over the final 1:30 to preserve the victory.