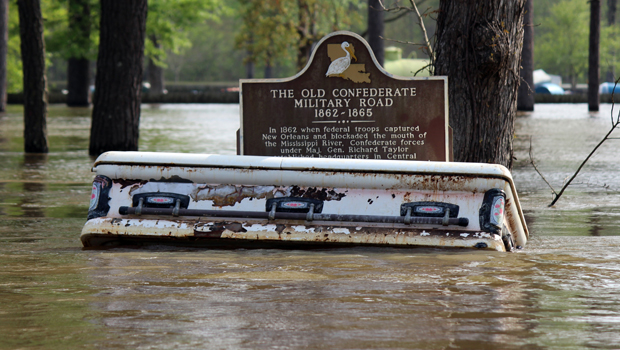 NEW ORLEANS -- Widespread flooding not only disrupts the living but sometimes also creates havoc for the dead.

That's what happened in southwest Louisiana's Calcasieu Parish when an overflowing Sabine River - helped by days of heavy rain - recently pushed water inland about four miles, disturbing graves buried in at least five cemeteries in the towns of Vinton and Starks.

The parish Coroner's Office last month completed the recovery of caskets and vaults or lids that floated from their resting places during flooding March 12 and beyond. Charlie Hunter, a coroner's investigator, said the graves are typically surface vaults, meaning three-fourths of the vault is under ground with the lid only above ground.

"When water is over the top of the grave for extended periods of time, the pressure causes the grave to either pop the lid or float the entire vault," he said.

By comparison, the graves in New Orleans are above ground because the area is considered below sea level and would fill with water if crews dug too deep.

Officials said 88 caskets were recovered, most from Niblett's Bluff Cemetery in Vinton.

"There was catastrophic damage there," Hunter said.

The other cemeteries affected were Wimberly in Vinton; Doyle annex, Fountain and VFW all in Starks.

"Some of those vaults affected weighed 1,800 to 2,000 pounds and they were found 100 to 200 yards from the cemetery. People just don't understand the power of water," Hunter said.

Emily Dalfrey, who lived about 800 feet from Niblett's Bluff, said the graves of nine family members - including her great-grandmother - were disrupted there and she lost her home to the floodwaters.

"It's been very emotional," she said, a slight break in her voice. "But the coroner's office has been a tremendous help. They were out there, while the waters were still rising, tying off caskets that had floated away."

Hunter said because the area previously went through significant storms, like Hurricanes Katrina, Rita and Ike, the parish government had a plan in place to handle grave disturbances.

"We had a good heads up that this was coming, having gone through it before," Hunter said.

So crews were sent to several cemeteries in the projected flood area before the severe weather to document and photograph where and how many graves might be affected.

"We were able to secure those caskets or vaults to fence posts and in other ways before they floated away," Hunter said. "We did the best we could to make sure they would not leave the cemeteries."

The remains that did get loose have been recovered and placed in refrigerated trucks parked at the coroner's office as investigators begin the identification and re-interment process.

"This has been heartbreaking," said Shannon Bellard-Amy, 38, of Lake Charles, who had relatives buried at Niblett's Bluff. "I know they're not there (in the grave) but in a sense they are because that's their final resting place. We came back the day after the water receded and it was like a bomb went off in that cemetery. The devastation was unreal. Vaults were everywhere but most devastating was that there were so many empty spaces."

"Thankfully, they've all been found and identified," she said. "It's been a long process but the coroner's office did a wonderful job. I hope they know how much they're appreciated."

Zeb Johnson, a retired investigator for the coroner's office who comes back when they need extra help, said they're working diligently, yet with care and compassion for family members.

"I'm always mindful of what William Gladstone said years ago. He was an English philosopher. He said, 'Show me the way a community cares for its dead and I will plot with mathematical exactness, the moral values of that community.' And I think that this is what we're seeing now in this community. These people lost their homes and their belongings but they care for their dead and they're very concerned about getting their cemeteries back in shape and they're returning that respect to the people of this community," he said.

Cemetery Association President Tina Courville said they're urging families to re-bury remains deeper, at least 6 feet deep, when they are returned to their resting places. Courville has said graves at those levels were not disturbed. She also said the cemetery is considering changing its bylaws requiring new burials to be below the ground.

Questions remain about who will pay for the reburials.

Hunter said FEMA is involved and his office, along with the police jury, is working to come up with a workable option. "We're encouraging families to file for personal assistance through FEMA which can help with the reburial process," he said. "This is going to take several months. It's not a simple process. It's going to take time."