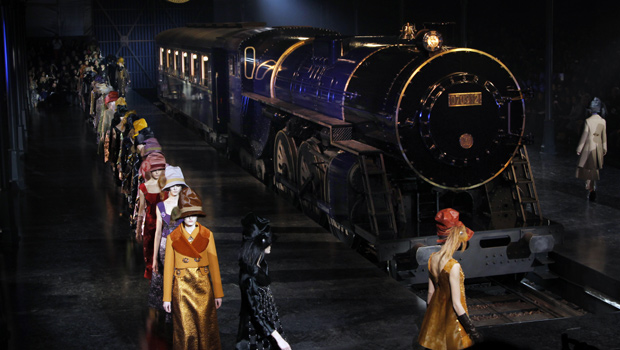 In a big-budget production, the house that made its name and built its early fortune with leather luggage wheeled out a steam-spewing locomotive on tracks at the Louvre Museum for its fall-winter show Wednesday.

It took a moment for the spectators to focus on the clothes on the platform catwalk.

"It's just sumptuous, and what a spectacle,'' said French cinema icon Catherine Deneuve stepping onto the carriage after the show.

"We're imagining the romance of a better time,'' said Jacob speaking backstage. "Whatever you try, clothes never really live in the past. They are worn now so they are modern, with a modern take.''

At which point Jacobs revealed he was wearing a knee-length black dress. "Oh, don't worry, I'm wearing boxer shorts underneath.''