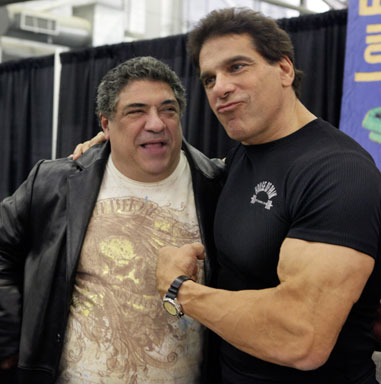 PHOENIX (CBS/AP) If it were a reality show, it could be called "Rounding Up Immigrants with the Stars."

Actually, it's the real deal: a posse to crack down on illegal immigrants, organized by Sheriff Joe Arpaio of Maricopa County in Arizona, and whose number includes the actor-bodybuilder Lou Ferrigno (aka "The Incredible Hulk"), action-film star Steven Seagal, and actor Peter Lupus formerly of TV's "Mission: Impossible."

In all, 56 members of the posse were sworn-in at a ceremony on Wednesday, although Seagal and Lupus did not attend.

What exactly will this Hollywood-heavy posse be doing to crackdown on illegals?

Arpaio says the volunteers' duties include bringing arrestees to jail, and handling demonstrators who interfere with immigration patrols.

"Arizona is the busiest port of entry for people being smuggled in from Mexico, Latin and South America. So asking for the public's help in this endeavor makes sense, especially given the success the posses have experienced over the years," Arpaio told CBS affiliate KPHO.

Arpaio has sworn-in similar posses since taking office in 1993, with membership having grown to nearly 3,000.

"Law enforcement budgets are being cut and agencies are losing personnel and yet the battle to stop illegal immigration must continue," Arpaio told the station.

The self-styled "America's Toughest Sheriff" told KPHO, "My ultimate goal with the creation of this newest posse is to catch and jail as many illegal immigrants coming into this county and to apprehend those who are illegally living and working here already."

Ferrigno, best known for his starring role in "The Incredible Hulk" television series, lives in California. He says the volunteers have a job to do to help protect the country against drug and immigrant smugglers.

"I must warn you that we are in for a rude awakening, because this country right now is in a lot of danger," Ferrigno said at the ceremony Wednesday.