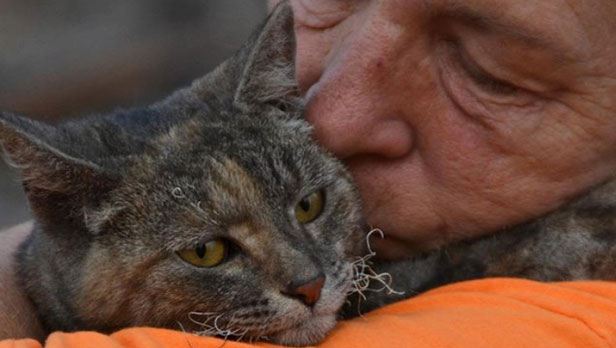 HAYFORK, Calif. -- Debi and Jeff Brusatori had to evacuate their Northern California home due to the Fork Complex Fire burning in Trinity County five days ago, and their tabby cat Ruthie Rosemary was accidentally left behind, reports CBS Sacramento.

When the Brusatori family returned to their scorched property five days later, there was some good news. They heard a familiar "mew" from a under burned truck. Ruthie Rosemary somehow survived.

The Brusatori's tell CBS Sacramento that their tabby cat was loaded up into their car when they evacuated, but somehow managed to jump out and was left behind. She was discovered mostly unharmed despite some singed eyebrows and whiskers.

CBS Sacramento reports that firefighters aren't sure where the cat waited out the fire. The flames were hot enough to melt the aluminum parts of the truck she was found under.

On Sunday night a new wildfire broke out several miles southwest of a destructive fire in Northern California and doubled in size overnight.

The California Department of Forestry and Fire Protection says evacuations have been ordered for the new fire that started Sunday. Containment was not in sight Monday morning.

The blaze is burning near a wildfire that has destroyed 43 homes and 53 outbuildings and chewed up 109 square miles since it started on July 29. It is now 85 percent contained.