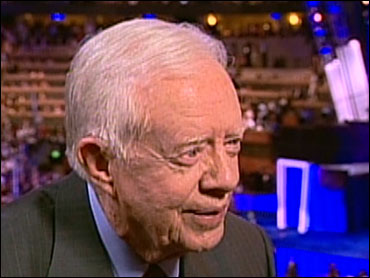 John B. Judis is a senior editor at The New Republic and a visiting fellow at the Carnegie Endowment for International Peace.

The Obama administration is increasingly being compared to the Carter and Clinton administrations--and the comparisons are not meant to be favorable. Both of those earlier administrations stumbled seriously during their first two years, with dire consequences for their legislative agenda and for their party.

I expect, and hope, that Barack Obama will avoid this fate. Obama has surrounded himself with people far more savvy in the ways of Washington than Jimmy Carter or Bill Clinton initially did. (You get bonus points for remembering the name of Clinton's first chief of staff.) Obama has certainly learned from their failures, and so have the Democrats in Congress, who under Nancy Pelosi have a tougher and more capable leader than the Democrats had in 1993. Still, there is a similarity between the two past administrations and the Obama administration that could signal trouble ahead.

Each of these administrations came into office, along with Democratic majorities in Congress, pledging to pass legislation that would affect the distribution of wealth and (even more important) power between the corporate/financial sector and the rest of America. The Democratic administrations championed what you could call "class legislation," and by doing so, they set off a class struggle that they lost.

Here is a rundown of some of the class legislation that the prior administrations sponsored. Carter and the Democrats favored redistributive tax reform, public campaign financing, a consumer protection agency (that Ralph Nader had long championed), and labor law reform. Clinton and the Democrats had a shorter list of this kind of legislation. It included increased funding for regulatory agencies and limits on executive compensation--but right at the top was national health insurance reform. Clinton's health bill would have benefited some corporations, but it would have curtailed the prerogatives and very possibly the profits of private insurance companies, and it would have forced large companies that didn't offer health insurance to do so.

A powerful new coalition of Republican conservatives and business groups, including the newly formed Business Roundtable, opposed Carter's measures. As I described in my book, The Paradox of American Democracy, they brought pressure not only on politicians, but also on the media, including The Washington Post, which reversed its support for the consumer protection agency. Carter got none of this legislation through Congress. And in 1978, the weakened Democrats performed poorly at the polls, setting the stage for the rout of 1980.

Clinton didn't fare much better. He got some of his regulatory funding increases through Congress, but they were rescinded by the Republicans who took over Congress in November 1994. Most importantly, the Republican-business coalition that had destroyed Carter's agenda made sure that Clinton's health care bill never even made it to the floor for a vote. Clinton was re-elected in 1996, but it was a different Bill Clinton. Chastened by defeat, he moved to the "center," which in this case meant that he did not offer any legislation that threatened people and companies at the pinnacles of power.

The Obama administration has already had its share of legislative successes. But these successes, such as the passage of the stimulus program, have not included legislation that threatens class power and wealth. Those bills that do threaten class relations--the administration's proposals for health care reform, executive compensation limits, and financial regulation--are now bottled up in Congress. Another bill, the Employee Free Choice Act, which would have benefited labor unions, seems to have been shelved.

The Republican-business coalition, led by the American Bankers' Association and the Financial Services Roundtable (which includes 92 corporations with $16 trillion in assets), has taken aim at efforts to create a Consumer Financial Protection Agency, while the Business Roundtable is leading the fight against regulations that would limit executive compensation. The way they see it, these are provisions designed to curb their power and profits. A similar coalition, including insurance companies, hospitals, and the U.S. Chamber of Commerce, has taken aim at those parts of the health care bill, particularly the public option, that would potentially limit business's powers.

Of course, there is nothing intrinsically meritorious about this kind of power-shifting legislation. It wouldn't make sense, for instance, for the government to nationalize the major computer software firms in the country rather than ensuring that private competition prevails among them. But health care and finance are two industries that have seen private competition and self-regulation fail miserably in achieving results that benefit the public interest. It's necessary for the government, acting on the public's behalf, to step in.

Obama and the Democratic leadership in Congress seem to understand this. They have already succeeded in doing one thing Carter and Clinton failed to do: divide the ranks of their potential opponents. Obama's health bill generally enjoys some support from the American Medical Association and the drug company lobby, while his financial consumer protection agency is backed by an investors' coalition. And a few Republican senators seem ready to back some kind of health care legislation.

The real danger may be that Obama and the Democrats, particularly in the Senate, will get weak-kneed in the face of the Republican-business coalition and settle--either for health care legislation that increases subsidies, but doesn't rein in the insurance companies (which is what Clinton and the Democrats did after 1994), or for financial regulation that ostensibly imposes new rules, but doesn't strengthen the public's ability to enforce them. A case in point: the administration's proposal that asks the Securities and Exchange Commission to monitor the rating agencies more closely, but does not alter the fact that the SEC is funded by the very banks whose securities they are supposed to evaluate.

Obama has a difficult task ahead of him. The last time Congress passed and a president signed legislation that significantly limited the power of businesses and banks occurred during Richard Nixon's first term, when a host of regulatory agencies were formed. Nixon, of course, was no liberal. But the country was in an uproar, and a coalition of labor, consumers, and the New Left was able to defeat the business opposition. Soon afterwards, business and Republicans joined hands to block any future efforts along these lines. And this coalition has carried the day for over three decades. Can Obama succeed where Carter and Clinton failed? Or will he listen to the sirens of the op-ed pages who urge him to move to the center and avoid the class struggle?

By John B. Judis:
Reprinted with permission from The New Republic.