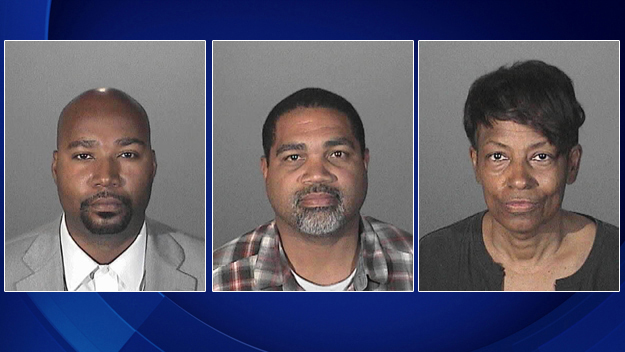 LOS ANGELES -- Three people, including one who works for California Attorney General Kamala Harris, were charged after claiming to operate a police department with jurisdiction in 33 states and Mexico and that traces its roots back 3,000 years, authorities said Wednesday.

Detectives believe other people may be involved in the operation, sheriff's spokeswoman Nicole Nishida said.

Deputies found ID cards, uniforms and law enforcement-like vehicles along with other official police equipment during their search of a home and office linked to the group, she said.

However, Nishida said there were no indications the group was stopping the public or conducting other law enforcement activities.

State records show Hayes is licensed as a security guard and has a firearm permit. She previously owned Masonic Security Service, and she and Henry run the Beverly Hills-based MIB Investigative Agency, though its state license is suspended.

Henry is a licensed security guard and also has a firearm permit.

Kiel, 31, worked as deputy director of community affairs at the California Department of Justice since July 2013. He has been on paid administrative leave from his $67,416-a-year civil service job since Thursday. The Los Angeles Times first reported that Kiel worked for Harris.

Department spokesman David Beltran said the agency can't comment on an ongoing personnel matter or criminal investigation. He said Kiel "worked with members of the public basically on issues and questions regarding the work of the department."

Kiel's name is mentioned under the "Special Thanks" section of a 2014 report on truancy from Harris' office, CBS Los Angeles reports.

Kiel, Henry, 46, and Hayes, 59, were arrested April 30 and released later that day, according to jail records. Telephone calls and text messages seeking comment were not immediately returned.

All three were charged on April 28 with multiple counts of impersonating an officer and other misdemeanors, said Ricardo Santiago, a spokesman for the district attorney's office.

Henry has been charged with committing perjury under oath for declaring the Masonic Fraternal Police Department is a state agency. Kiel is charged with misusing his government identification.

Hayes is a pastor and moderated a debate between sheriff's candidates in the most recent election, Nishida said.

Henry won an Emmy in 2002 for his work as a producer on a Fox11 story, according to Variety.com. He also co-produced a documentary with Hayes several years later about a longtime civil rights leader, the Los Angeles Sentinel newspaper reported in 2007.

The investigation started after various police chiefs in Southern California received a letter in late January that announced new leadership for the Masonic Fraternal Police Department.

The Jan. 20 letter obtained by The Associated Press was copied to Harris. It was written by Kiel, identified as its chief board of director, and Hayes, the grand chief director, and includes a badge emblem with Henry's name below.

In the letter, the group claims it is registered with the state and is informing the chief it will be working with "Grandmasters, as well as fraternities and sororities throughout Sovereign Jurisdictions around the country."

The letter claims there are 5,686 lodges and that the department "will be able to acquire intel that is not accessible to non-fraternal entities." It said one aim of the department was to restore public trust.

A website for the Masonic police force says the group was created by the Knights Templar in 1100 B.C.

A man claiming to be Kiel and describing himself as chief deputy director of the police force later followed up with various law enforcement agencies to schedule sit-down meetings, officials said.

Henry and Hayes showed up in black jumpsuits with Masonic Fraternal Police patches and stars on their collars. Hayes had a handgun on her utility belt, Johnson said.

Kiel was there too, wearing a dark navy business suit. They told Johnson they were opening a new Canyon Country police station.

Johnson said he grew wary when they couldn't answer questions about where they derived their authority, or jurisdictional issues.

"Brandon Kiel gave me a business card from the Department of Justice, showing he worked out of Kamala Harris' office," Johnson said. "That really raised red flags for me."