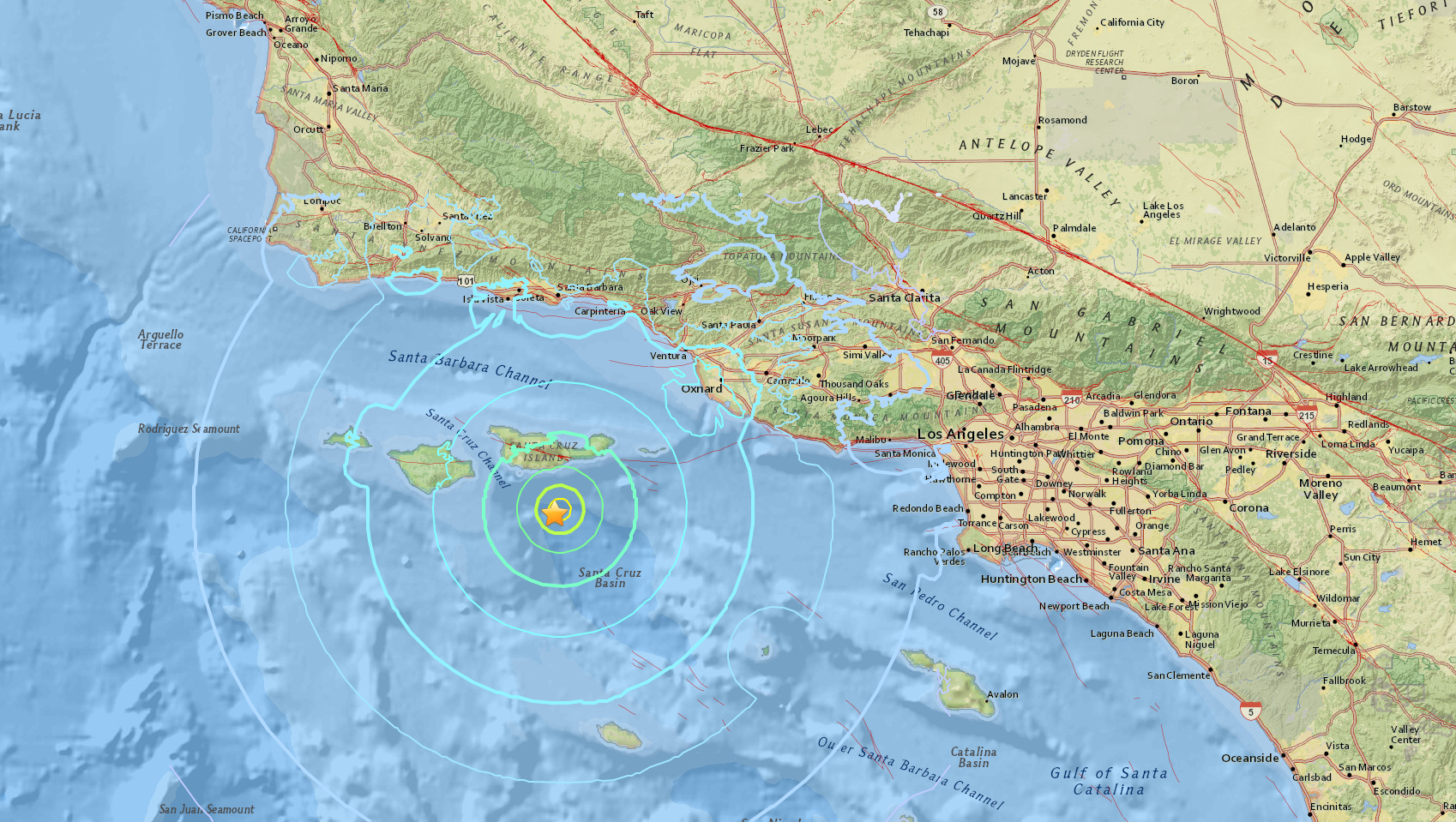 An earthquake with a magnitude of 5.3 struck off the coast of Southern California on Thursday, officials at the U.S. Geological Survey (USGS) say. CBS Los Angeles reports the quake originated near the Channel Islands. It happened around 12:30 p.m. local time about 38 miles southwest of the mainland city of Ventura, according to the USGS.

"A 5.3 is a good jolt," Dr. Susan Hough of the USGS said Thursday at a press conference with Dr. Jennifer Andrews of Caltech, and that it was no surprise people in Los Angeles felt the quake.

"We would expect aftershocks, and there is the potential for some triggered seismicity," Andrews said.

The quake's strength was revised upward from initial estimates of magnitude 5.0. It struck about 10.5 miles underground, the USGS said.

Asked was it likely to follow typical aftershock patterns, Hough said "We can never count on earthquakes to obey the averages" but said that they did expect an aftershock pattern, most likely peaking in the magnitude 4 range.

"Earthquakes are not at all predictable. We can say what's happened in the past, we cannot say what's going to happen," Hough said, adding: "There's always a 1 in 20 chance that an event like this will trigger something bigger."

An early warning system did alert residents in Los Angeles before the shaking was felt, Caltech confirms.

The Associated Press writes that the Los Angeles Fire Department said it went into "earthquake mode" and firefighters from all 106 of its firehouses began surveys of their territories, including bridges, dams, large buildings and power lines.

"We currently have no reports of damage or injuries," fire department spokeswoman Margaret Stewart said.

Ventura County officials announced they are "in a heightened response posture to assist our citizens" in wake of Thursday's temblor.

Officials took this opportunity to urge residents to make a communications plan if they don't have one already and to check if they have emergency supplies on hand.

Although there was no significant damage reported, some bricks fell from a chimney at a historic ranch in the Channel Islands region.

Channel Islands National Park spokeswoman Yvonne Menard tells The Associated Press that bricks fells at a ranch building on Santa Cruz Island that dates back to the 1860s. She added that visitors and staff members on the island felt the quake, but nobody was injured.

Most of Santa Cruz, including the ranch area, is owned by The Nature Conservancy, which cooperatively manages the island with the Park Service.

People took to social media to document the quake affecting their area. People living in areas such as Tarzana, San Dimas, Long Beach, Pomona and Torrance reported shaking, according to CBS Los Angeles.

This Twitter user wrote they could see "lamps swinging" and they could "hear the house crack":

Even an eagle and her chicks felt the earthquake, as captured in video footage provided by CBS Los Angeles: