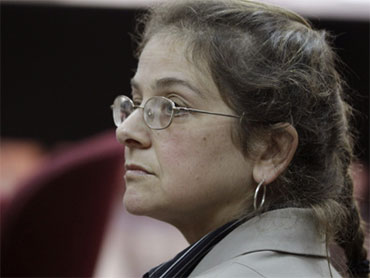 American activist Lori Berenson apologized Monday for aiding leftist rebels and asked a Peruvian court to let her remain free on parole after serving 15 years of her 20-year sentence behind bars.

The 40-year-old New Yorker acknowledged collaborating with the Tupac Amaru Revolutionary Movement, but said she was never a member of the group or involved in violent acts.

"If my coming to Peru has meant harm to the country, I am sorry and I regret it," she told the criminal appeals court in Lima.

Prosecutors are trying to have Berenson sent back to prison for the remainder of her sentence, arguing that a May decision granting parole was riddled with errors.

The three-judge panel will have up to 15 days to announce its decision. If the court revokes parole, Berenson would be required to return to prison with her 15-month-old son, Salvador.

Berenson was initially accused of being a leader of the Tupac Amaru, known by the Spanish initials MRTA, which bombed banks and kidnapped and killed civilians in the 1980s and 1990s - though it was nowhere near as violent as the better-known Shining Path insurgency.

When she was arrested in November 1995 with the wife of the group's leader, prosecutors said Berenson was helping plot a takeover of Peru's Congress. The alleged plot was thwarted in a gunbattle at a rebel hideout rented in Berenson's name.

Berenson was convicted of treason by a military court in 1996 and sentenced to life. But after an intense campaign by her parents and pressure from the U.S. government, she was retried in a civilian court. In 2001 it convicted her of the lesser crime of terrorist collaboration and sentenced her to 20 years.

"I was sentenced for the crime of collaboration with terrorism, and I did collaborate with the MRTA, but I haven't been a leader nor a militant. I have never participated in acts of violence ... nor have I killed anyone," Berenson told the court, accompanied by her lawyer and husband Anibal Apari.

"If my participation, although secondary, contributed to violence in society, I am deeply sorry and I regret it," she said, adding later: "If there are people who feel affected by my words and acts, I ask for forgiveness."

It is her strongest and most public apology to date. Prosecutors have questioned whether Berenson is truly sorry and raised doubts about whether she has cut all links to the rebel group.

Under the terms of her parole, Berenson is required to remain in the South American nation until November 2015.

She has asked for her sentence to be commuted, however, saying she wants to go with her son to seek medical treatment in the United States.