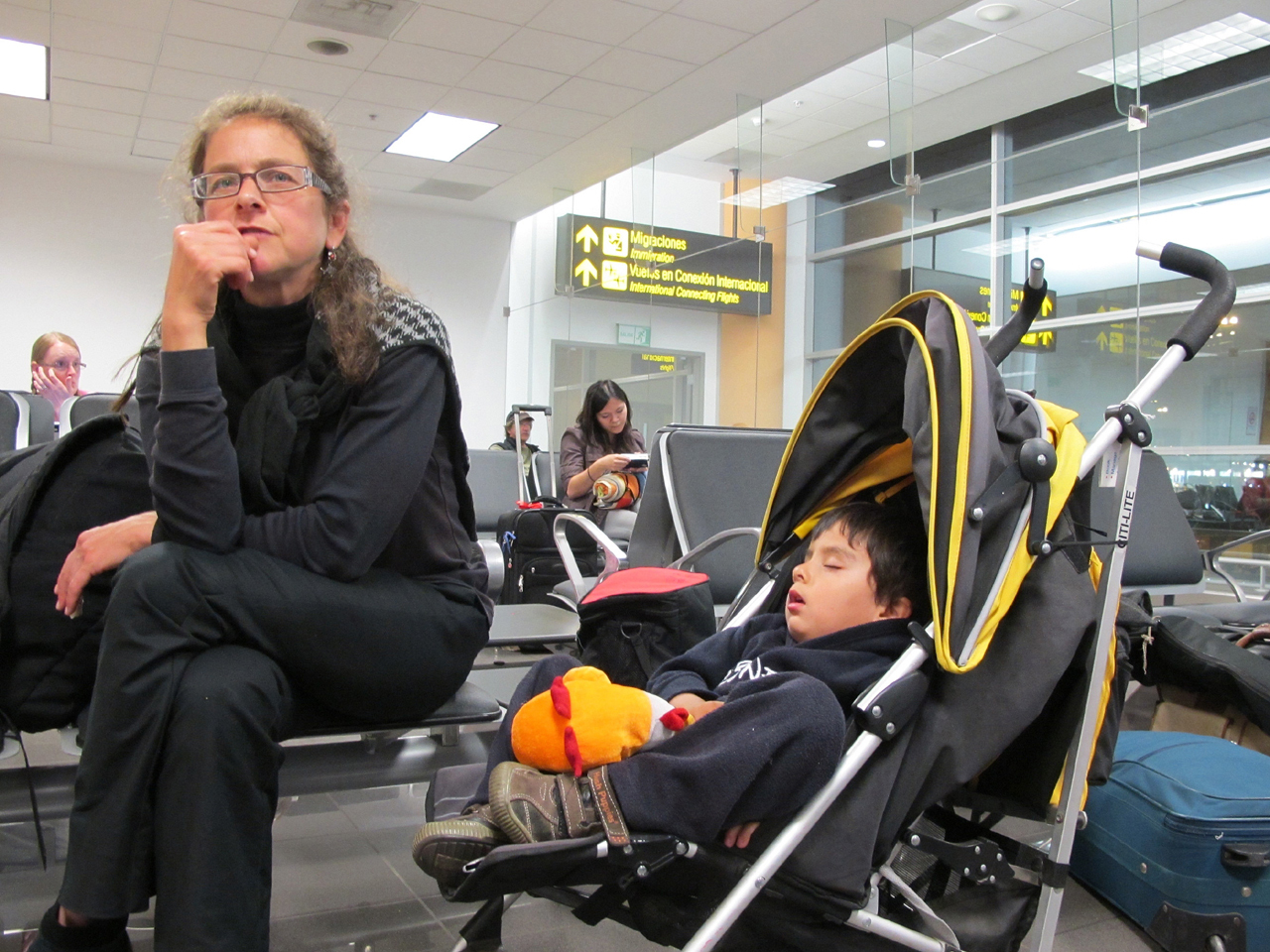 LIMA, Peru - Paroled American Lori Berenson, who stirred international controversy after being convicted of aiding Peruvian guerrillas, was on her way back to the United States late Monday night for her first visit back home since Peruvian authorities arrested her in 1995.

The 42-year-old boarded a Continental Airlines flight at Lima's main airport under intense media scrutiny, as many in Peru wonder whether she will return to the country by the court-ordered deadline of Jan. 11.

Wearing a black turtleneck, black jeans and designer eyeglasses, Berenson told an Associated Press reporter while waiting for her flight that she intended to return to Peru. Berenson was accompanied by a U.S. Embassy employee.

"I just hope we don't get caught in a snow storm," she said, joking that such an occurrence in the U.S. would delay her return.

The AP reporter watched Berenson carry her 31-month-old son Salvador Apari to a seat in the back of the plane's economy section. The plane's doors were closed, and its wheels lifted off at 12:25 p.m. local time. It was scheduled to land at a New York area airport Tuesday morning.

Berenson's departure capped three days of confusion after Peruvian authorities had prevented her from boarding a flight to New York on Friday despite a court approval allowing her to leave.

The authorities said Berenson, who had served 15 years on an accomplice to terrorism conviction before her parole last year, lacked an additional document.

Peruvian migration officials finally gave Berenson another document Monday clearing her to leave the country with her son to spend the holidays with her family in New York City.

Her father, Mark Berenson, said Monday that he was anxious to see her return.

"I'm just glad that they finally resolved the thing," he told the AP by phone from New York.

Lori Berenson admitted helping the Tupac Amaru rebel group rent a safe house where authorities seized a cache of weapons after a shootout with the rebels. She insists she didn't know guns were stored there and says she never joined the group.

In 1996, a military court of hooded judges convicted Berenson of treason and sentenced her to life in prison. After U.S. pressure, she was retried by a civilian court.

Mark Berenson said he went to sleep Friday night expecting to pick up his daughter and 31-month-old grandson, Salvador, the following morning.

Instead, he was awakened by news that she had been blocked from returning and spent the rest of the night angry and unable to sleep.

Lori Berenson and Salvador, accompanied by two officials who appeared to be from the U.S. Embassy, spent Monday morning at Peru's main migration office in downtown Lima and left shortly after 1 p.m. in a dark SUV with diplomatic plates.

"What she was given was an exit order," the assistant to the office's director, Jose Luis Ubillus, told the AP.

A spokeswoman for the U.S. Embassy, Mary Drake, said consular officials were assisting Berenson "as they would to any citizen."

RPP radio quoted migration office director Edgard Reymundo as saying of Berenson: "I don't know why she threatened to file suit and complain when there was no persecution, but only the need to obtain an exit order."

It's not clear whether Berenson's delayed exit amounted to government harassment or whether she simply got caught between competing bureaucracies.

Political analyst Aldo Panfichi, a Catholic University professor, said he believed she was not the victim of a conspiracy.

"It is highly probable that this is a question of excess bureaucracy by mid-level functionaries or miscoordination and lack of clarity between state agencies," he said.

The court ruled that Berenson was not a flight risk. Her father told the AP that his daughter has every intention of returning to Peru.

By law, she must remain in Peru until her full sentence lapses unless President Ollanta Humala decides to commute it.

State anti-terrorism attorney Julio Galindo said he filed an appeal on Friday seeking to nullify the court ruling that approved Berenson's New York trip. He opposed Lori Berenson's parole from the start, and succeeded last year in having her returned to prison on a technicality for 2 1/2 months until a court ordered her freed in November.

Its gaping inequalities drew the young Berenson to Peru from El Salvador, where she had worked for the country's top rebel commander during negotiations that led to a 1992 peace accord.

Tupac Amaru was a lesser player in Peru's conflict and Berenson sought it out, she told the AP in an interview last year, because it was similar to other revolutionary movements in Latin America.

The group never set off car bombs or engaged in the merciless slaughter of thousands as Shining Path rebels did, but it did engage in kidnappings and selective killings.

In the 1980s, it was known for hijacking grocery trucks and distributing food to the poor.

The group most famously raided the Japanese embassy in Peru in 1996 during a party and held 72 hostages for more than four months. A government raid killed all the rebel hostage takers.

She was initially unrepentant, but harsh prison life softened her. She was praised as a model prisoner in the report that supported her parole.

Some Peruvians still consider her a terrorist. She had been insulted in the street, and news media have repeatedly hounded and mobbed her.