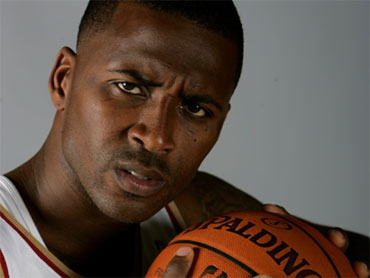 With numerous rumors swirling around the case, Goodwin urged citizens to not "jump to conclusions."

"There are a lot of rumors out there," he told WREG. "I would ask that the citizens, they know us very well, they know our great solve rate. We are going to do the right thing...bear with us."

Goodwin assured citizens that his investigators would do everything in their power to solve the case now that they have taken it over from the Germantown Police Department, which is located outside of Memphis.

No arrests have been made, Sherra has not been called a suspect. Sherra's divorce attorney Gail Mathes spoke to CBS affiliate WREG and said, "There is a rumor out there that she was involved in the killing of Mr. Wright, which is absolutely false." He described their divorce as amicable, and said that Sherra "wanted the children to be involved with their father and she needs or needed his financial help."

Wright, 34, was last seen by family members July 19; three days later he was reported missing. Wright's body was found July 28 in a wooded area just outside Memphis. His death was deemed a homicide by gunshot wounds. Police confirmed that a 911 call was placed from Wright's phone in the early hours of July 19, but there has been a discrepancy regarding the time of call and the response by the Germantown Police Department.

Goodwin has no plans to point fingers. "I wouldn't want to comment on Germantown doing anything wrong at this point because they may have followed all protocol," he said to WREG.

His main objective is to find answers, for Wright's hometown of Memphis, for his fans and for his family. According to Goodwin his team has been working tirelessly around the clock to find evidence that may lead them to a suspect.

Public memorial services are being held Wednesday at the FedExForum in Memphis in honor of Wright. During his 13 year career, Wright played for the Memphis Grizzlies from 2001-2006.