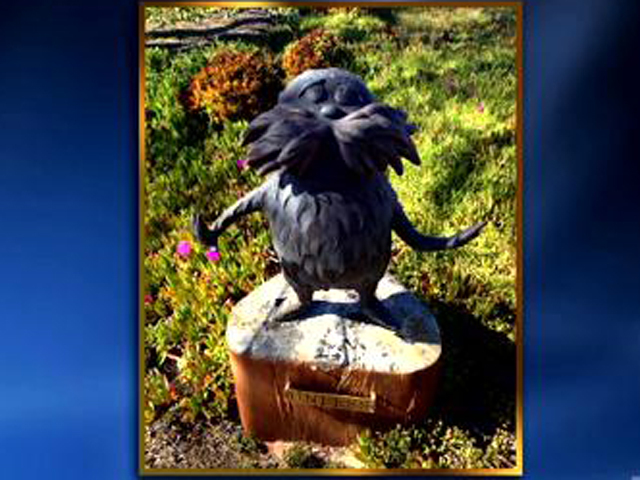 (CBS) LA JOLLA, Calif. - A 2-foot-tall, 300-pound Lorax statue that was stolen from the oceanfront home of Dr. Seuss' widow in 2012 has been recovered and returned to the Geisel estate, according to CBS San Diego.

Audrey Geisel and a groundskeeper reportedly noticed that the custom-made bronze statue was missing from the garden on March 26, 2012.

The station reports the statue is valued at around $10,000 and was crafted to resemble the "Lorax," the title character of the famed 1971 children's book by Theodore Geisel, known by his pen name Dr. Seuss.

A 22-year-old man reportedly walked into a police station in Bozeman, Montana and said he knew about crimes that were committed in San Diego and Hawaii.

According to CBS San Diego, the information provided by the man led authorities to a canyon area covered in thick brush in La Jolla. The statue was recovered at around 9:30 a.m. Wednesday and returned to the Geisel estate.

Police reportedly said they are still looking into who took the statue. An investigation is ongoing and charges are pending, police said.