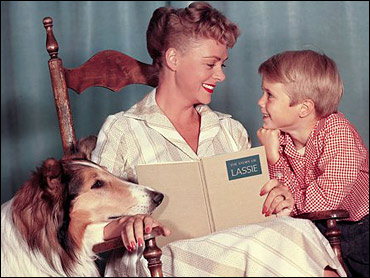 In the early 1950s, when television sent Hollywood into the doldrums and studios were thinning their contract lists, some stars began appearing in their own TV series.

Among them: Lucille Ball, Loretta Young, Donna Reed - and Lassie.

The talented collie had become a full-fledged star with MGM's much-loved "Lassie Come Home" in 1943 and six more hit movies after that, only to be pink-slipped in 1951.

But Lassie came back. On a Sunday night as the 1954 fall TV season got under way, a new four-legged franchise was born when CBS premiered its "Lassie" TV series. In the years that followed, the loyal collie would become one of the planet's most beloved animals.

At the peak of Lassie's career, the dog was allowed to travel on airplanes with trainer Rudd Weatherwax, with one airline even calling to find out how the dog would like his steak cooked.

Weatherwax recalled such a flight in the mid-1960s: "... The plane's captain announced over the loudspeaker that there were two important Hollywood personalities aboard. First he named a well-known film star and the announcement caused a mild ripple throughout the cabin. Then he noted that Lassie was also on the plane. It seemed to me that everyone in the cabin stood up in excitement trying to find Lassie."

The original "Lassie" series lasted until 1971 in prime time, and until 1974 in first-run syndication. Now, Lassie continues to warm the hearts of millions of fans through worldwide syndication, personal appearances, TV commercials, and a new DVD of early episodes. There are even plans for a British remake of "Lassie Come Home"

But for those who don't know, a disclosure seems appropriate: Lassie and her eight descendants have been, well, female impersonators. That's right - Lassie has always been a he, not a she, and his name wasn't Lassie.

Female collies were given screen tests before the filming of "Lassie Come Home," but it turned out the males were more photogenic - generally larger, and with more neck fur.

They also required less maintenance, according to June Lockhart, who starred in the TV series from 1958 to 1964 and recently appeared with Lassie No. 9 (aka Hey Hey) at several anniversary events in New York.

"They don't shed twice a year as the females do," she explained. "And they don't have the problem of coming into season when we were on location, which would have attracted a lot of other dogs; we would have had to turn the hose on them."

So, how did they keep Lassie's maleness from showing on camera?

An editor was assigned to study the action carefully, and if evidence of the dog's true gender was exposed, he would yell "Cut!" and the scene would be reset.

Having acted with two generations of Lassies, Lockhart, 79, learned their capabilities and their limitations.

"When we were shooting on the show, the dog was excused often to go to the dog room and nap while we used a stand-in," she recalled. "Only humans can be expected to work 14 or 15 hours a day. Dogs sleep a lot."

Jon Provost was 7 and already an experienced film actor when he was hired in 1957 for a supporting role as the orphan Timmy on the "Lassie" series. Then when Tommy Rettig, the original boy lead, left the show later that season, Jon was promoted to Lassie's constant companion.

"When I returned from Japan after filming `Escapade in Japan,' I had a meeting with the producers of `Lassie,"' Provost recalled. "They said I had the look they wanted, and I didn't have to audition because they had seen clips of the movies I had done. They knew I could act.

Provost, now 54, stayed with the series until 1964, when a format change sent the Martin family to a new life in Australia. Lassie stayed behind because of animal immigration laws, and she went through a series of owners until the series ended.

Author Ace Collins, who grew up with collies on his father's farm in Arkansas, wrote a magazine article about Lassie in the early 1990s. His research resulted in a 1994 book, "Lassie: A Dog's Life," which is still in print.

"Of the 150-250 commands that Lassie knew, the one he hated was 'nurse,"' said Collins, referring to those occasional scenes when Lassie nursed a new litter. "They would put honey on the dog's coat. The last thing Lassie wanted was puppies chewing on his coat."

One of Lassie's trademark commands - and the stuff of comic references for decades - was when the collie would bound into a scene and start whimpering, barking or tugging. Then the response would come: "Lassie's trying to tell us something."

Such a line today might meet with a more cynical, "Well, yaahh!" But in those more innocent days, this was serious climactic business, and when they finally figured it out, it was always Lassie to the rescue.

"Rin Tin Tin" also debuted on television in the fall of 1954. But while both had a big-screen heritage, Rin Tin Tin had been around since the silent days and was fading when Lassie was becoming popular with theatergoers. One reason: Rin Tin Tin's films were basically B-movies and Lassie films were lusher, more expensive, feature presentations with major stars. This contrast continued on TV, with the "Lassie" series featuring stronger casts on a more popular network and in a better timeslot. As a result, ABC's "Rin Tin Tin" lasted only until 1959.

So why has Lassie remained an American icon after all these years?