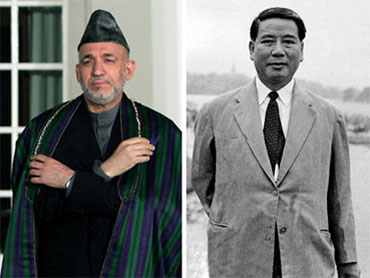 Top U.S. officials have reached out to a leading Vietnam War scholar to discuss the similarities of that conflict 40 years ago with American involvement in Afghanistan, where the U.S. is seeking ways to isolate an elusive guerrilla force and win over a skeptical local population.

The overture to Pulitzer Prize-winning historian Stanley Karnow, who opposes the Afghan war, comes as the U.S. is evaluating its strategy there.

President Barack Obama has doubled the size of the U.S. force to curb a burgeoning Taliban insurgency and bolster the Afghan government. He has tasked Gen. Stanley McChrystal, the top U.S. commander, to conduct a strategic review of the fight against Taliban guerrillas and draft a detailed proposal for victory.

McChrystal and Richard Holbrooke, the U.S. special envoy to the country, telephoned Karnow on July 27 in an apparent effort to apply the lessons of Vietnam to the Afghan war, which started in 2001 when U.S.-led forces ousted the Taliban regime in the wake of the 9/11 attacks.

Among the concerns voiced by historians is the credibility of President Hamid Karzai's government, which is widely perceived as being plagued by graft and corruption. They draw a parallel between Afghanistan's presidential election on Aug. 20 and the failed effort in Vietnam to legitimize a military regime lacking broad popular support through an imposed presidential election in 1967.

"Holbrooke rang me from Kabul and passed the phone to the general," said Karnow, who authored the seminal 1983 book, "Vietnam: A History" (Penguin).

Holbrooke confirmed to The Associated Press that the three men discussed similarities between the two wars. "We discussed the two situations and what to do," he said during a visit last week to NATO headquarters in Brussels.

In an interview Thursday with the AP, Karnow said it was the first time he had ever been consulted by U.S. commanders to discuss the war. He did not elaborate on the specifics of the conversation.

When asked what could be drawn from the Vietnam experience, Karnow replied: "What did we learn from Vietnam? We learned that we shouldn't have been there in the first place. Obama and everybody else seem to want to be in Afghanistan, but not I."

"It now seems unthinkable that the U.S. could lose (in Afghanistan), but that's what experts ... thought in Vietnam in 1967," he said at his Maryland home. "It could be that there will be no real conclusion and that it will go on for a long time until the American public grows tired of it."

An administration official said academics and outside experts have been consulted frequently during the Obama presidency, especially around high-profile events or decisions. The official spoke on condition of anonymity to speak more freely about the administration's behind-the-scenes thinking.

Holbrooke and Karnow have known each other since they were both in Vietnam in the early 1960s. At the time, Holbrooke was a junior U.S. diplomat and Karnow a Time-Life correspondent.

Holbrooke briefly commented on contrasts between the two conflicts, noting that the military regime in Saigon was corrupt and unpopular, while the international community seeks to build a democracy in Afghanistan.

The Vietnam War also was a much bigger conflict. Nearly 550,000 U.S. troops were deployed at the height of the war, whereas 102,000 international troops are currently in Afghanistan - of which 63,000 are American.

James McAllister, a professor of political science at Williams College in Massachusetts who has written extensively about Vietnam, said the administration could learn a lot from Vietnam.

"American policy makers clearly see parallels between the two wars," he said. "They know that the mistakes we made in Vietnam must be avoided in Afghanistan."

• In both wars, security forces had an overwhelming advantage in firepower over lightly armed but highly mobile guerrillas.

• Insurgents in both cases were able to use safe havens in neighboring countries to regroup and re-equip.

• He pointed to McChrystal's order to limit airstrikes and prevent civilian casualties, linking it to the overuse of air power in Vietnam which resulted in massive civilian deaths.

McAllister drew a parallel to another failed political strategy from Vietnam - the presidential election.

"That ('67 ballot) helped ensure that U.S. efforts would continue to be compromised by its support for a corrupt, unpopular regime in Saigon," McAllister said.

Rufus Phillips, Holbrooke's boss in Vietnam and author of the book "Why Vietnam Matters" (Naval Institute Press) echoed that warning.

"The rigged election in South Vietnam proved (to be) the most destructive and destabilizing factor of all," said Phillips, now in Kabul helping to monitor the upcoming election.

David Kilcullen, a counterinsurgency specialist who will soon assume a role as a senior adviser to McChrystal, compared Karzai to South Vietnamese President Ngo Dinh Diem.

"He has a reasonably clean personal reputation but he's seen as ineffective; his family are corrupt; he's alienated a very substantial portion of the population," Kilcullen said Thursday at the United States Institute of Peace.

"He seems paranoid and delusional and out of touch with reality," he said. "That's all the sort of things that were said about President Diem in 1963."

Arctic warming up to four times faster than the rest of the planet, study shows
Thanks for reading CBS NEWS.
Create your free account or log in
for more features.
View CBS News In
CBS News App Open
Chrome Safari Continue
Be the first to know
Get browser notifications for breaking news, live events, and exclusive reporting.