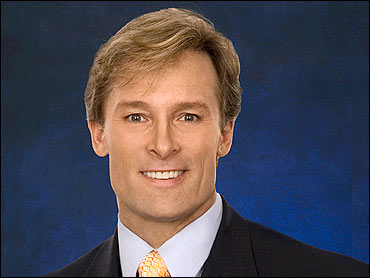 Lonnie Quinn became the weather anchor for "The Early Show on Saturday Morning" in 2008.

A private pilot, Quinn is schooled in meteorology. It is his ability to brave the elements on the ground, however, that serves him best on Saturday mornings.

While news anchors Erica Hill and Chris Wragge look all polished and happy in the studio, it is Lonnie who is outside on the plaza getting buffeted by winds, pelted with sleet, drenched with rain or pummeled by snow, all to introduce America to someone's new baby, or a high school glee club, or even a couple celebrating a 50th anniversary. According to Quinn, it is a great way to spend a Saturday!

Monday through Friday, Quinn is the weatherman in New York City for the CBS 2 News at 5:00 p.m., 6:00 p.m., and 11:00 p.m. Wragge anchors those newscasts. If you do the math, that means Quinn and Wragge work six days a week together. "I see Chris more than my wife. I'm hoping he will just break down and adopt us!" Quinn quips.

The six-time Emmy Award recipient won five of them in 2009, including one for best environmental report for "Weather on the Top of Mount Washington" and one for best societal concerns report for his "Preparing for Extreme Winter Weather."

Quinn joined WCBS-TV in 2007 after a five year run at WTVJ, in Miami, Fla.

Quinn's television career actually started as an actor on ABC's "All My Children." That experience enabled him to develop a comfort in front of the camera that's served him well in local and national broadcasting.

After changing careers from acting to newsman, Quinn's first job was at WVIR in Charlottesville, Va. He was hired as a cameraman but, three months later, a chance to report in front of the camera solidified his new career path. Soon, his duties included full-time reporting and anchoring the weekend weathercasts. While in Charlottesville, Quinn covered the Thomas Jefferson/Sally Hemings controversy and the famous baby switch at the University of Virginia hospital. He also reported extensively on the rising political career of Emily Couric before her unfortunate death in October 2001.

Miami, Fla. was the next stop, and it was a turning point in Quinn's career. Not only was he promoted to full-time weather anchor, but was also allowed to develop his own, unique style. Quinn has always been a fan of the weather and he hates the idea of a boring weathercast. His approach is to give the viewers the information they need…with a smile as a by-product.

By 2005, Quinn was one of Miami's most popular on-air personalities and guided the area through the most active hurricane season in history. For five years, Quinn worked closely with Max Mayfield at the National Hurricane Center. He also joined the "Hurricane Hunters" collecting data on a Category 5 hurricane as they flew through the eye of "Isabel" off the coast of North Carolina.

Outside the weather, Quinn loves to report a good story. His belief is every network will most likely be covering the same event, so you'd better come up with some way to make your story-telling stand out. He is a proud winner of a regional Emmy award for best on-air talent.

Thus, you can now find him playing racquetball weekday mornings at the Westside Y in New York City. A native of Cheshire, Conn., he currently lives in Manhattan with his wife, Sharon, and his son, Nate.

He 100 percent totally digs his job!