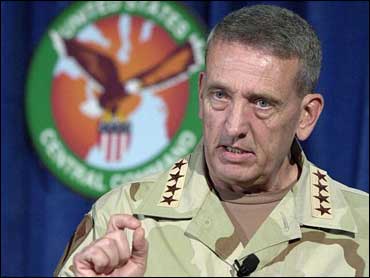 American troops will be needed in Afghanistan for many years to ensure that the war-ravaged country does not revert to a haven for terrorists, the U.S. war commander says.

Army Gen. Tommy Franks, whose Central Command troops are leading the campaign in Afghanistan, made no specific prediction about how long U.S. forces would remain in the country.

Noting that the United States has long-term military commitments in many countries, Franks singled out Korea, where tens of thousands of American forces have been stationed for half a century.

"It does not surprise me that someone would say, 'Oh gosh, the military is going to be in Afghanistan for a long, long time.' Sure we will be," Franks said Thursday at a Pentagon news conference.

There are about 8,000 U.S. troops in Afghanistan as part of an international coalition that is hunting for remnants of Osama bin Laden's al Qaeda terrorist organization and leaders of the Taliban militia that harbored them. The troops also are training an Afghan national army and providing civil services.

In a similar vein, Air Force Gen. Richard Myers, chairman of the Joint Chiefs of Staff, said during a public appearance Thursday in Savannah, Ga., that the global war on terrorism may go on for years.

"It could last years and years, so we must be patient," Myers told a conference of the Jewish War Veterans of the United States. He said he is frustrated at the pace of progress but mindful that the goal is to destroy the far-flung al Qaeda network before it attacks Americans again. Myers' remarks were about the broader war on terrorism, not just the situation in Afghanistan.

Defense Secretary Donald H. Rumsfeld said he and Franks met earlier Thursday to discuss the situation in Afghanistan and cautioned reporters against "jumping to conclusions" about whether they were working on plans for war in Iraq.

Both men disputed news reports of a clash between them about how to approach the Iraq problem.

"I have actually never one time sensed animosity" from Rumsfeld, Franks said.

The defense secretary said, "From my standpoint, the relationship is superb." He and Franks, whose headquarters is in Tampa, Fla., speak by phone at least once a day, Rumsfeld said.

Massood, military chief of the northern alliance and the most charismatic figure in the anti-Taliban movement, was mortally wounded Sept. 9 when two suicide attackers posing as television reporters exploded a bomb during an interview in the northern Afghan town of Khodja Bahauddin.

Mullah Mohammed Khaksar, one of the founders of the Taliban and the Islamic militia's one-time intelligence chief, told The Associated Press that bin Laden had ordered two suicide bombers diverted from a trip to Indonesia to carry out the mission.

In explaining why he expects U.S. forces to remain in Afghanistan for many years, Franks did not indicate that he believes they will continue the hunt for al Qaeda and Taliban that long. Instead, he said, the length of the stay will depend on how long it takes the new Afghan government to get on its feet.

"One would expect a maturation of the government inside Afghanistan, one would expect the training of the Afghan national army, border security forces, police forces and so forth, to come along in accordance with a plan," he said. As those things progress, fewer U.S. troops will be needed.

"We would not be wise to put a timeline on when we see that happening," Franks added.

Rumsfeld said the goal is to ensure that Afghanistan becomes capable of providing its own security.

"We didn't go in there to leave in a way that allows it to turn back into a terrorist training camp," he said. A key to preventing that outcome is establishing a unified Afghan army, he said.

Rumsfeld said the Pentagon is considering ways to speed up the training of troops and police. He provided no specifics and did not say whether more U.S. forces would be committed to training.

U.S. and French forces so far have trained only two battalions of an Afghan national army, totaling about 600 men. A major impediment has been a lack of money to pay the troops. Rumsfeld said Thursday that he is concerned that international pledges of financial assistance have been slow to materialize.