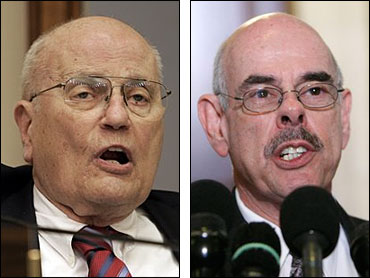 Rep. Henry Waxman - a liberal ally of Speaker Nancy Pelosi - has wrested the chairmanship of the powerful House Energy and Commerce Committee from veteran Rep. John Dingell when the new Congress convenes in January.

Waxman, a California liberal and avid environmentalist and booster of health care programs, toppled Dingell Thursday on a vote of 137-122 in the Democratic Party caucus, capping a bitter fight within party ranks.

Dingell has been the top Democrat on the panel for 28 years and is an old-school supporter of the auto industry. Waxman has complained that the committee has been too slow to address environmental issues like global warming.

"The next two years are critical," said Rep. Jan Schakowsky, D-Ill., who spoke on Waxman's behalf in the closed-door caucus. "It's not personal. It's about the American people demanding that we embrace change and work with the president on critical issues of climate change and energy and health care."

Waxman, 69, is an accomplished legislator. He had chaired the Energy and Commerce health and environment subcommittee for 16 years and won a series of piecemeal expansions of the Medicaid health care program for the poor that added many children to the program. He's also taken on the tobacco companies.

The Energy and Commerce panel is one of the most important House committees, with sweeping jurisdiction over energy, the environment, consumer protection and health care programs such as Medicaid and the popular State Children's Health Insurance Program.

Waxman has been the top Democrat on the Oversight and Government Reform Committee for the last 12 years. Since Waxman became chairman of that panel two years ago, it has taken the Bush administration to task over global warming and allegations that it muzzled government scientists. It also has investigated the White House's political operation, the use of steroids in sports and, most recently, abuses behind the financial collapse.

Dingell, 82, has been the committee's top Democrat for 28 years and is an important ally of automakers and electric utilities. He's considered one of the House's premier legislators, with a lengthy track record on health, consumer issues and the environment, among other things.

Dingell's defenders said he had done nothing to deserve being dumped, pointing to the panel's busy workload over the last two years, including successfully enacting an energy bill that raised automobile fuel economy standards to 35 miles per gallon by 2010.

"I think it was highly inappropriate," said Rep. Rick Boucher, D-Va. "There was no obvious reason for it other than the desire for another person to chair the committee.