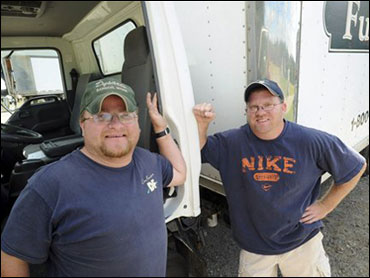 Seven years into his tenure as a furniture mover for a local bedding retailer, Gary Nisbet was joined by a new colleague, Randy Joubert, who looked so much like him that customers asked whether they were brothers.

"We thought they were just trying to razz us," Joubert said.

Turns out the customers were on to something. They really are brothers - and the attention they got after finding each other also has turned up a sister.

The two men were given up for adoption as babies about 35 years ago, then attended rival high schools and even lived in neighboring towns on the Maine coast before working together at Dow's Sleep Center in tiny Waldoboro and uncovering their relationship.

"This kid could have been anywhere in the world, and here I am riding in a Dow furniture truck with him," Joubert said in a telephone interview Monday.

Joubert's adoptive mother, Jacqueline Joubert, of Grand Island, Fla., said she and her late husband raised him with four sisters. She said he knew from a young age he was adopted and she wasn't surprised he would try to find his biological siblings when he grew up.

She said she always thought he had a brother because a social worker at the time of his adoption had mentioned it.

"But when he said he was driving a furniture truck with him, that really surprised me," she said. "I think it's great."

Dow's hired Randy Joubert on July 7, and soon afterward co-workers began commenting on how similar he and Nisbet looked. Both are light-haired, wear glasses and have stocky builds. Their goatees and curled-brim baseball caps add to the effect.

Joubert, 36, laughed off the commentary but admits he noticed the similarities himself, even mentioning them to his fiancee. He started taking the comments more seriously when people also took notice while he and Nisbet, 35, were out making deliveries.

"Customers would ask if we were brothers more often than not," he said. "Then my brain started heading that way."

Joubert had already taken advantage of a new state law allowing adoptees to see their original birth certificates and found out the names of his biological parents, who had died by then.

With further help from statistics officials, he also learned that he had a brother - and his brother's original name. Joubert and Nisbet had been removed from their birth parents' home because the couple could not properly care for them.

Well armed with details, Joubert posed a few questions to Nisbet while the two were making deliveries about three weeks ago.

"I said, 'Gary, I'm going to ask you a strange question: Are you adopted?"' Joubert recalled.

Nisbet gave him a strange look and answered, yes, he was adopted.

Then Joubert asked whether Nisbet knew his parents' names. Nisbet, who had learned details of his adoption through a court request, again answered yes.

Joubert recited the couple's names - only to meet a mixed reaction of amazement and annoyance.

"He takes off his hat and says, 'How did you know that?"' Joubert recalled.

When Joubert asked about Nisbet's birth date, June 10, 1974, he knew he had found his long-lost brother.

"I about fell over," he said, "because I knew that date."

Nisbet, the quieter of the two, said he was "star-struck and blown away. I couldn't even believe it." He was raised with three brothers and a sister in his adoptive family but never knew he had a biological brother.

The brothers kept their story under wraps at work until last week, colleagues said.

"Everybody was standing around with their mouths open. The girls had the tears flying and the guys, just, 'Wow!"' Dow's employee Greg Berry said. "There's nothing like family, especially when you don't have one. Now they've got it."

More than they know what to do with, it seems.

After all the attention the brothers' story received in the Maine press, a half-sister turned up at Dow's furniture with copies of her birth certificate and other documents proving their relationship.

Joubert says Joanne Campbell, of nearby Warren, was "hysterical" with joy when she found her brothers. Campbell, 41, had the same mother as Joubert and Nisbet.

"I searched for her too," Joubert said, "and I was close to finding her."