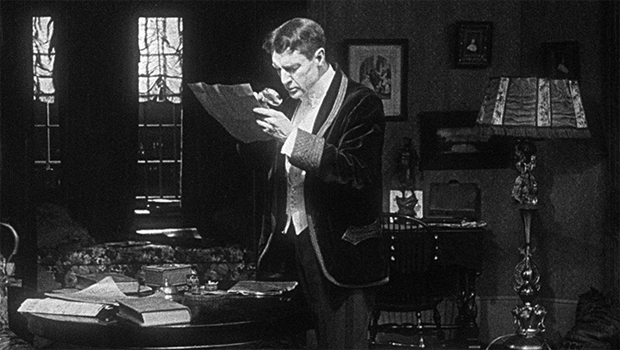 The game is afoot yet again for Sherlock Holmes as played by William Gillette, the most acclaimed actor to play Sir Arthur Conan Doyle's detective more than a century ago.

Gillette had written and starred in a highly successful stage adaptation of the Holmes stories, and in 1916 recreated the role on film. That feature, like so many from the silent era, has long been lost. But film sleuths have uncovered the missing film and are restoring it for its re-premiere.


The rediscovery of "Sherlock Holmes" was announced on Wednesday by the French Cinémathèque Française and the San Francisco Silent Film Festival.

A nitrate dupe negative of the film with French titles and color tinting had been located in the Cinémathèque Française's vaults. The film is now being digitally restored.

"William Gillette's 'Sherlock Holmes' has ranked among the Holy Grails of lost film," said film restorer Robert Byrne, "and my first glimpse of the footage confirms Gillette's magnetism. Audiences are going to be blown away when they see the real Sherlock Holmes on screen for the first time."

The restored film will debut in Paris at the Cinematheque Francaise in January, and will be featured at the San Francisco Silent Film Festival in May.

Directed by Arthur Berthelet and produced by Essanay Studios, "Sherlock Holmes" featured elements from several Doyle stories (including "A Scandal in Bohemia," "The Final Problem" and "A Study in Scarlet"), as well as Holmes' nefarious antagonist, Professor Moriarty.

Gillette was not the first actor to play Holmes on film -- that honor goes to the anonymous star of a 30-second nickelodeon flick produced in 1900 by American Mutoscope & Biograph -- but Doyle allegedly described Gillette as the best thespian to tackle his creation.

In a press release, Russell Merritt, a film professor at the University of California-Berkeley who collaborated on the project (and who is a member of the Baker Street Irregulars), said, "At last we get to see for ourselves the actor who kept the first generation of Sherlockians spellbound. We can also see where the future Holmeses -- Rathbone, Brett, Cumberbatch, and the rest -- come from. As far as Holmes is concerned, there's not an actor dead or alive who hasn't consciously or intuitively played off Gillette."