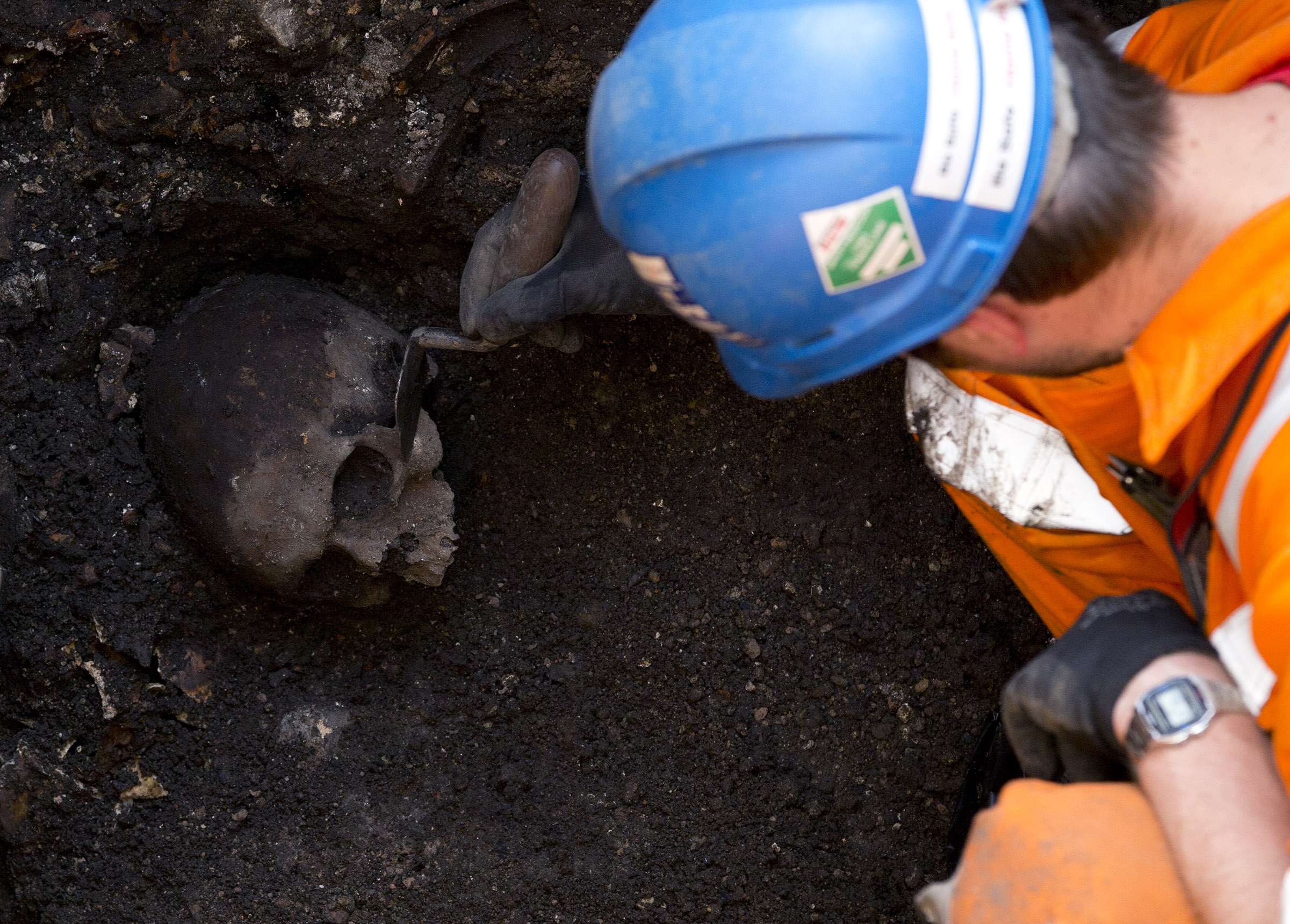 More often than not, they stay there, but work on a new railway line under the British capital is bringing centuries of that buried history to light.

The 118-kilometer 73-mile Crossrail line is Britain's biggest construction project and the largest archaeological dig in London for decades. In the city's busy business core, archaeologists have struck pay dirt, uncovering everything from a chunk of Roman road to dozens of 2,000-year-old horseshoes, some golden 16th-century bling — and the bones of long-dead Londoners.

One afternoon this week, archaeologists were unearthing newly discovered bones in a pit beside Liverpool Street rail and subway station, while living city-dwellers scuttled by, oblivious, a few feet away. The remains belong to a few of the 20,000 people interred in a burial ground established in the 16th century.

"Everyone's been running around in Liverpool Street for years and not thinking that they've been walking around on bodies from one of the densest burial grounds in London," said Nick Elsden, a Museum of London archaeologist helping to oversee excavations that go along with the work on the Crossrail line.

The 2,000-year history of London goes deep — 16 to 20 feet deep, the distance between today's street level and sidewalks in Roman times. Crossrail is providing archaeologists with a chance to dig down through those centuries — and even beyond, to prehistoric times.

"This site is a rare, perhaps unprecedented opportunity," Elsden said as he watched museum staff gently brush dirt from newly found bones and a skull in a hole that will soon house a maintenance shaft. "This is a major roadway outside one of London's busiest railway stations. You don't get to dig that up normally."

The 14.8 billion pound ($23 billion) railway, due to open in 2018, will run across London from west to east, with a central 13 mile section underground. That has meant tunneling beneath some of the city's oldest, most densely populated sections.

Alongside tunneling work — advancing by 330 feet a week and due to be finished next year — more than 100 archaeologists have been involved in excavations at 40 sites over the past four years.

They've found everything from reindeer, bison and mammoth bones dating back 68,000 years to the remains of a moated Tudor manor house, medieval ice skates, an 800-year old piece of a ship and the foundations of an 18th-century shipyard.

Earlier this year, the dig unearthed skeletons belonging to victims of the Black Death, the plague that wiped out half of London's population in 1348.

The latest discoveries include pieces of flint, some shaped into tiny blades, from a 9,000-year-old tool-making factory beside the Thames in what is now southeast London. It's evidence the area was being resettled after the last Ice Age by nomadic hunter-gatherers.

At Liverpool Street, recent finds include a 16th-century Venetian gold coin with a small hole that suggests it was an early sequin, worn as decoration on the clothes of a wealthy person who probably lost it. It was found in a rubbish deposit.

Elsden and his team are especially excited to have uncovered the remains of a Roman road, studded with 2,000-year-old horseshoes — more precisely equine sandals, made of metal and fastened to the hooves with leather straps.

So many have been found that researchers suspect this must then, as now, have been a busy transit area, with horses bringing produce from the countryside to residents of what was then known as Londinium.

"Roman horseshoes, stuck in a rut of the Roman road — you've got this unique little snapshot," Elsden said. "You can see a Roman pulling his cart across the bridge. That's a rare little glimpse into ordinary Roman life."

Some of the archaeologists' most delicate work involves remains from the Bedlam burial ground, established in the 16th century underneath what is now Liverpool Street as the city's medieval church graveyards filled up.

Thousands of Londoners were buried there over 150 years, from paupers to religious nonconformists to patients at the adjacent Bedlam Hospital, the world's first psychiatric asylum. Its name, a corruption of Bethlehem, became a synonym for chaos.

Jay Carver, Crossrail's lead archaeologist, says the project will mean disinterring the remains of about 4,000 people.

Workers will treat the remains with delicacy and respect, practices not always followed in the past.

The recently discovered Roman road is made of rammed earth, clay, wood and — surprisingly — human bones, washed by a river from a nearby cemetery and incorporated into the building material.

"We tend to think in the past they were superstitious about bodies, but no," Elsden said. "Bits of bodies are washing around out of cemeteries — they're not that worried about it."

Centuries later, gravestones from the Bedlam cemetery were used as foundations of later buildings, and the soil has yielded pieces of bone, antler, tortoiseshell and ivory — leftovers from local craft workshops dumped over the cemetery wall in the 17th century.

The newly excavated human remains will be studied for clues to diet and disease before being reinterred elsewhere.

Most of them will, of necessity, be reburied anonymously. But Carver holds out hope that research may be able to identify some individuals. The Bedlam graveyard is known to contain the remains of several prominent people, including Robert Lockyer, a member of an egalitarian 17th-century political movement known as the Levelers.

Lockyer was executed by firing squad at St. Paul's Cathedral after leading an army mutiny in 1649 before being buried at Bedlam.

"If you find someone who's been executed with a musket, that's going to leave some kind of damage," Carver said. "It would be quite exciting if we could identify someone in that way."