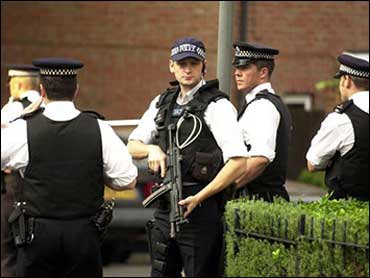 The point-blank shooting of a man in front of horrified commuters has shocked many in Britain, where most police officers do not carry guns. The concern is certain to rise after police said Saturday the man had nothing to do with the transit attacks.

London Mayor Ken Livingstone drew a hard line before the mistake became clear, declaring that for anyone believed to be a suicide bomber it was going to be a "shoot-to-kill policy." But he softened his tone Saturday.

"The police acted to do what they believed necessary to protect the lives of the public," he said. "This tragedy has added another victim to the toll of deaths for which the terrorists bear responsibility."

Jean Charles de Menezes, 27, who was identified Saturday, was killed Friday at Stockwell station as police investigated the series of botched transit bombings a day earlier and the attacks of July 7 that killed 56, including the four bombers.

CBS News Correspondent Elizabeth Palmer reports that the police's fatal mistake may have shaken the public's confidence in them. Dr. Azzam Tamimi, of the Muslim Association of Britain, told Palmer that tensions are high in the Muslim community.

"We're not judging the police here. We're not judging anybody. We're simply worried and simply anxious. I'm reflecting the anxiety the deep anxiety of the community since yesterday," he said.

Brazilian media reports said Menezes was an electrician who had been legally living and working in Britain for the past three years. It was not immediately known if Menezes was Muslim; about 80 percent of Brazilians are Roman Catholic.

Witnesses said the Brazilian was wearing a heavy, padded coat when plainclothes police chased him into a subway car, pinned him to the ground and shot him in the head and torso.

"They pushed him onto the floor and unloaded five shots into him," witness Mark Whitby told the British Broadcasting Corp. "He looked like a cornered fox. He looked petrified."

The incident shocked a city where police shootings are rare. Between 1997 and 2004, police in London fired guns 20 times, killing seven people, according to police statistics.

Hours after Menezes was killed, Metropolitan Police Commissioner Ian Blair said he was "directly linked" to the bombing investigations. The Brazilian "was challenged and refused to obey police instructions," Blair said.

But on Saturday, a Metropolitan Police official said on condition of anonymity that Menezes was "not believed to be connected in any way to any of the London bombings." The official requested anonymity because no official announcement had been made.

Even before the announcement, the Daily Mail had warned "If this man was unarmed and not carrying a bomb, it will raise worrying questions."

The Daily Express had no such qualms.

The Guardian newspaper said that after taking guidance from Israeli counterparts, British anti-terrorism police had devised a new strategy in dealing with suicide bombers, including instructing officers to shoot to kill, aiming at the head. Scotland Yard would not comment on the report.

But police sources and security experts said it was clear from the incident that officers were operating under revised guidelines.

Some Muslims already fearing a backlash following the July 7 bombs — the worst attack on London since World War II — have spoken of new fears.

"We are getting phone calls from quite a lot of Muslims who are distressed about what may be a shoot-to-kill policy," said Inayat Bunglawala, a spokesman for the Muslim Council of Britain.

The Islamic Human Rights Commission said "in the current climate of anti-Muslim hysteria, IHRC fears that innocent people may lose their lives due to the new shoot to kill policy."

Shami Chakrabarti, director of human rights group Liberty said "there must be a prompt, comprehensive and independent investigation into what happened."

"These are knife-edge, split-second decisions made in moments of grave danger," she said. "We have a massive shared interest in the protection of innocent lives."

Despite the increased tension, Palmer reports that in Leeds — home of three of the suicide bombers who killed 57 London commuters on July 7 — there was an interfaith peace march.

"We just want to show each other that we support each other, that we love each other," said one marcher.

The popular image of amiable British bobbies armed with little more than handcuffs and a truncheon is already outdated.

About 3,000 of the 31,000 officers in the Metropolitan Police are licensed to carry firearms. Since the Sept. 11, 2001, attacks, armed officers have become a common sight at train stations, airports and Parliament.

Norman Brennan of the lobby group Protect the Protectors that raises funds for families of officers killed in the line of duty said a largely unarmed police force was a luxury Britain could no longer afford.

"We are still the only unarmed police service in Europe and in view of the terrorist incidents over the past two weeks this must be reviewed as a matter of urgency," he said.