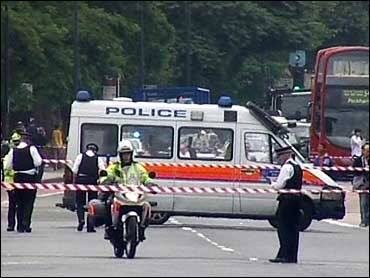 Plainclothes police chased a man in a thick coat through a subway station, wrestled him to the floor and shot him to death in front of stunned commuters Friday, a day after a jittery city was hit by a second wave of terrorist attacks.

The man died after being shot by officers at the Stockwell subway station in south London, police said.

Passengers said a man, described as South Asian, ran onto a train at the station. Witnesses said plainclothes police chased him, he tripped, and police then shot him.

"They pushed him onto the floor and unloaded five shots into him. He's dead," witness Mark Whitby told the British Broadcasting Corp. "He looked like a cornered fox. He looked petrified."

Whitby said the man didn't appear to have been carrying anything but said he was wearing a thick coat that looked padded.

"A man was challenged by officers and subsequently shot," the police said in a statement. "London Ambulance Service attended the scene. He was pronounced dead at the scene."

Police would not say which armed unit was involved. Ordinary beat police officers do not usually carry guns, but some special units do, and armed police have become a more common sight on London's streets in recent years.

Service on the Northern and Victoria Tube lines, which pass through Stockwell, was suspended because of the shooting, British Transport Police said. Stockwell is one station away from the Oval station, which was affected by Thursday's attacks.

Elsewhere, police evacuated one of London's largest mosques after a bomb threat before Friday afternoon prayers.

"Someone phoned our director and said there was a bomb inside," said Mohammed Abdul Bari, chairman of the East London Mosque.

The Metropolitan Police lifted the cordon about an hour later, saying no armed officers were involved, and the incident appeared unrelated to the subway shooting.

More than 6,000 people were expected for Friday afternoon prayers but there were only about a dozen people inside at the time the threat was telephoned in.

Investigators, meanwhile, searched for fingerprints, DNA and other forensic evidence connected to Thursday's attacks on three subway trains and a double-decker bus, which were hauntingly reminiscent of suicide bombings only two weeks before.

The devices in Thursday's attacks were either small or faulty, and authorities said the only person who needed medical attention was a person suffering an asthma attack. The July 7 bombings on three Underground trains and a bus killed 56 people, including the four suicide bombers.

Saudi ambassador Prince Turki al-Faisal said the attacks had "all the hallmarks" of al Qaeda.

"The modus operandi, the sheer cowardice associated with them and the attacks on innocent civilians — these are all part and parcel of al-Qaeda," he said in an interview with BBC radio.

The attacks targeted trains near the Oval, Warren Street and Shepherd's Bush stations. The double-decker bus had its windows blown out on Hackney Road in east London.

Mia Clarkson, 24, defiantly said she refused to change her schedule. "You've got to keep living, don't you?" she said as she exited the Chancery Lane station after a trip from across town.

"Britain will not be beaten," vowed a front-page headline in the Daily Express. "Is this how we must now live?" asked the Daily Mirror over pictures of the attacks' aftermath. The Independent had a similar photo montage and the words: "City of Fear."

Police would not comment on the investigation. Witnesses described seeing men fleeing several of the attack scenes.

Police appealed for witnesses to give information and set up a Web site to receive amateur video of the attacks and their aftermath.

"Clearly, the intention must have been to kill," Police Commissioner Ian Blair said. "You don't do this with any other intention."

The London transport agency said the three affected subway stations remained closed Friday, and service was suspended on all or part of several lines. Other lines have been disrupted since the attacks two weeks ago.

Terrorism expert Neil Livingstone (video)
told CBS News' The Early Show that the group behind Thursday's attack "appears to have been the same" as the one responsible for the July 7 bombings.

"There are some reports that the bombs were almost identical or maybe identical to the bombs that exploded two weeks ago. Whatever happened, however, these were not made as well, and it's a great stroke of good luck that three of the devices didn't go off, even though the detonators did, and that in the other device that they had a bad detonator. That didn't happen the first time around with grave consequences."

Jeremy Binnie, an analyst with the London-based Jane's Terrorism and Insurgency Center, said Thursday's attacks seemed "much more amateurish in many ways" than the earlier one.