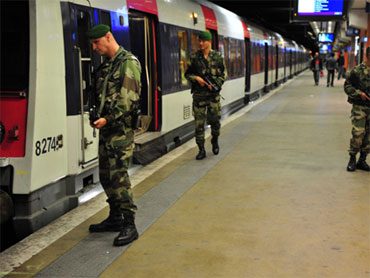 London is a dangerous place.

The warning has come after yet another plot to kill us all was discovered at the "talking about it stage." We have been warned that Al Qaida in its disparate form might try to cause carnage on transportation systems, tourist spots and most importantly to large crowds of people - wherever they may be. I hear there are quite a lot of people in America too.

What are you all doing over there? Avoiding family gatherings of more than, say, six of you? Taking it in turns to ride the subway? Avoiding Times Square at all costs? The alert, though well meant, is pretty pointless.

The terrorists are doing what they set out to do - terrorize us into staying at home in small groups of three - but absolutely no more. They will be loving the fear, the panic and the idiocy of stopping you from going about your life. These radicals could strike anytime and anywhere. If you had evil in your heart and learned that Americans were avoiding Europe, what would you do? I suggest you would strike somewhere else - like, say, America.

My aim is not to add to your terror but to point out that we are all in this together. A huge, massive crowd of us all over the world, on both sides of the Atlantic, who have nothing but peace in our hearts. If we let the terrorists win, we all lose.
by Petrie Hosken