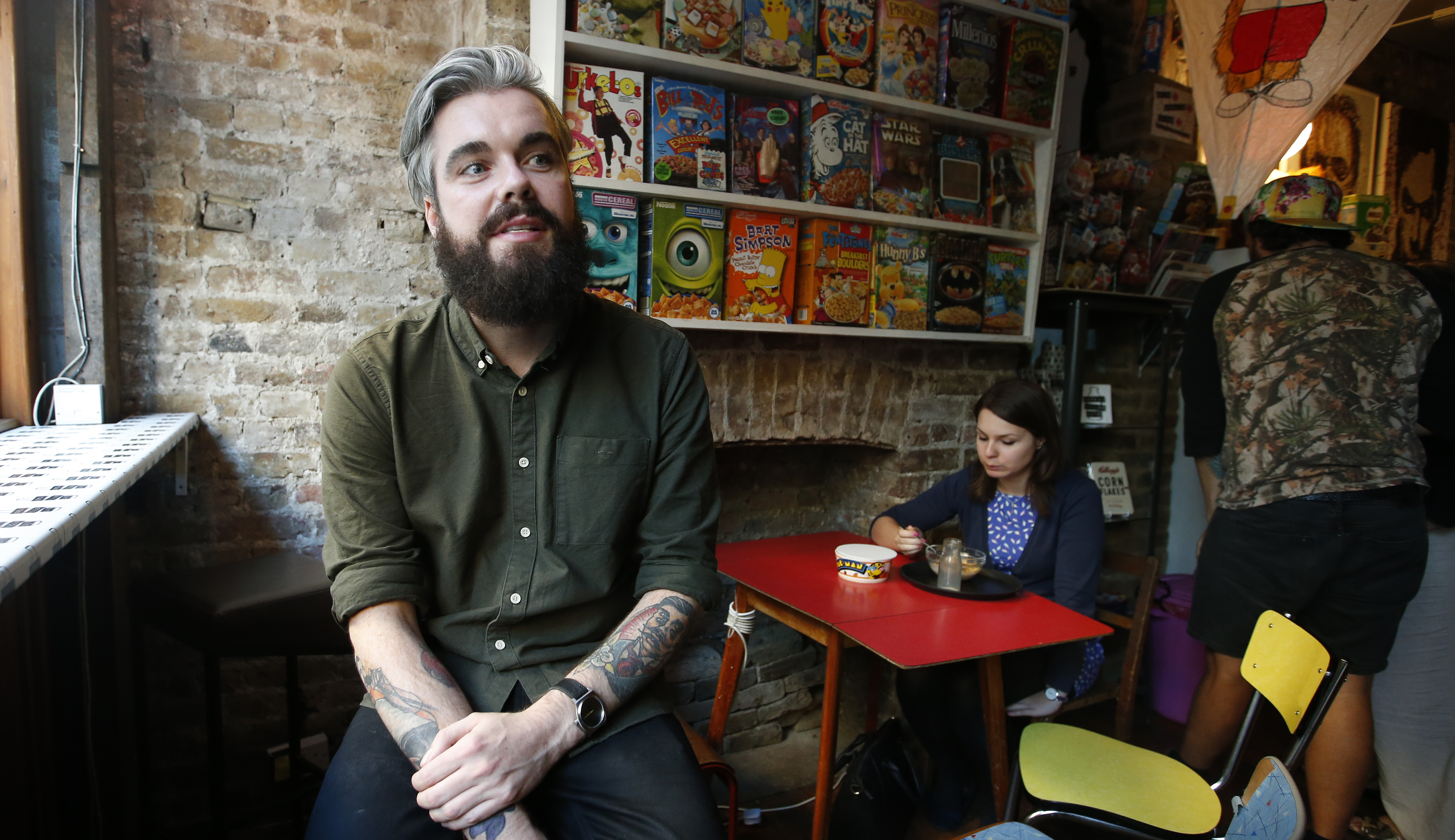 LONDON -- One of London's fastest-changing neighborhoods is echoing to the snap, crackle and pop of conflict.

An East End cafe that serves 120 varieties of breakfast cereal -- along with 30 kinds of milk -- has become a surprising flashpoint for protest in a city increasingly polarized between rich and poor.

The Cereal Killer Cafe has drawn both derision and big crowds since it opened nine months ago, offering a cornucopia of flakes, pops and puffs from about 3 pounds ($4.50) a bowl. On the weekend, it attracted the ire of anti-gentrification protesters, who surrounded the business with flaming torches and scrawled "scum" on its windows as customers sheltered in the basement.

"It is a bit weird," said Gary Keery, who runs the cafe with his brother, Alan. "I don't see us as hateful people - but a lot of people seem to."

Fashionably bearded 33-year-old twins from Belfast, Northern Ireland, the Keery brothers are among the latest wave of migrants to this diverse part of east London. Over the decades European Jews, Bangladeshi Muslims and hipsters from around the world have brought bagel shops and curry restaurants, espresso bars and independent fashion boutiques to Brick Lane and nearby Shoreditch.

It's that diversity that made the Keery brothers choose the area for their breakfast business.

"There's a lot of creative things happening," said Gary Keery. "A cat cafe just opened up around the corner. We just knew that if it was going to work, it would work in Brick Lane."

That hunch was correct, judging by the crowds of students, tourists and families lining up for a bowl of milk-soaked comfort food in the quirky cafe, where shelves are lined with brightly colored cereal boxes and a portrait of Hannibal Lecter made from Cheerios hangs on one wall.

"It takes people back to their childhood, when cereal was fun," Gary Keery said.

But not everyone is a fan. On Saturday, anti-poverty protesters targeted the cafe as a symbol of all that's wrong with London's development. Footage filmed from inside showed a group, some in pig masks and carrying torches, shouting outside as staff told customers to go downstairs.

Police say one officer was injured by a flying bottle during the protest, organized by militant anarchist group Class War.

Tony Travers, an expert on Britain's capital city at the London School of Economics, says the cereal storm is "a war by proxy about something much, much bigger": the squeeze on space in a booming city whose population, already 8.6 million, is growing by 120,000 people a year.

Developers are building just 20,000 to 25,000 new homes each year, so rents and property prices climb ever higher.

In the East End, a long-established working-class population has been joined - and sometimes displaced - by thousands of affluent young professionals in renovated buildings and shiny new developments. The result is an area where organic food shops sit alongside everything-for-a-pound stores. One-bedroom apartments sell for 500,000 pounds ($750,000) and up, but almost half of children in the local borough, Tower Hamlets, live in poverty.

Travers said the cereal cafe is "an innocent casualty of a wider struggle for territory in the city."

Class War says it is delighted with the publicity it has received and plans more protests outside independent businesses.

"The fight against gentrification has basically been lost and it's speeding up all the time," Class War founder Ian Bone told The Guardian newspaper. "So our philosophy is to go back to areas which have already been gentrified and start taking the fight back to them."

The Keery brothers are undaunted. They recently opened a second branch in London's tourist-heavy Camden Town, and have a cereal cookbook coming out next month.

And the attack has brought new customers to the cafe.

"There are worse things in the world than people eating cereal," said Tess Hoey, from Sussex in southern England, who came to show her support.

She said those concerned about London's property crisis should "talk about Russian oligarchs - not boys from Belfast."