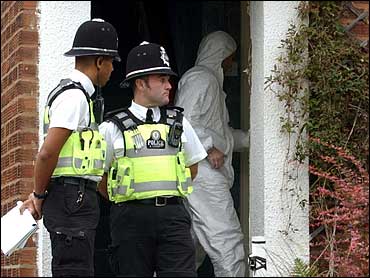 Police pursuing suspects in the failed July 21 London transit bombings raided four homes across Britain on Wednesday and detained four people, including a Somali man believed to be one of the fugitive bombers, authorities said.

Yasin Hassan Omar was subdued with a stun gun when officers stormed a home in Birmingham before dawn. Members of the bomb squad, some dressed in armored suits, were seen entering the home after police evacuated 100 nearby residences in a quiet, ethnically mixed neighborhood of Britain's second-largest city.

Prime Minister Tony Blair, without commenting on the man's identity, described the arrest as "an important development."

Peter Clarke, head of London police's anti-terrorist unit, confirmed the arrest and said police were still looking for the other three men believed involved in the failed attacks.

Three more men were arrested in a pre-dawn raid at another home about two miles away in this city 120 miles northwest of London. The raids were carried out by 50 officers from London's anti-terrorist unit and West Midlands Police. No shots were fired.

In London, police said they raided two homes at 6 a.m. in the northern neighborhoods of Finchley and Enfield. No arrests were made, but forensic examinations were under way at the residences, a spokeswoman said, speaking on customary condition of anonymity. She declined further comment.

Authorities said the four raids involved the investigation into the July 21 attack, during which bombs planted on three London subway trains and a bus failed to detonate fully. The attack came two weeks after four suicide bombers staged a similar assault that killed 52 other people.

Meanwhile, police arrested a man at Luton airport near London under anti-terrorism laws as he prepared to leave on a flight for France, authorities said. Police did not say why he was detained or if the arrest was connected with the London attacks.

Two men also were arrested late Tuesday on suspicion of terrorism while traveling on a train in the Midlands region. Police said the train, which was on its way to London's King's Cross station from Newcastle, was stopped at Grantham and the men were taken off. It was not immediately clear if the arrests were linked to the investigation into the London bombings.

Police said Omar, 24, was being taken to London's high-security Paddington Green police station, while the other three detained men were being held here.

"I looked out of the window and the road was full of armed police and they had got the road closed off," said electrician Andy Wilkinson, who lives near the brown brick duplex that abutted a sprawling park.

"After 10 or 15 minutes, they brought a guy out. He looked like the darkest-skinned one in the photos of the four suspects released by the police — the one with the curly hair," Wilkinson said. "They had him dressed in one of those white suits. He had plastic cuffs on the front."

Such suits are used by police to preserve any physical evidence that may be on a suspect.

"I think it is an important development," Blair, in London, said of the arrest. "Obviously we are greatly heartened by the operations today. The police have been working extraordinarily hard on this and have shown a tremendous amount of commitment and dedication to the task in hand."

Police launched a manhunt after releasing images of four men thought responsible for planting the July 21 bombs. The pictures have been plastered over much of London's transit and railway system while police have for more than a week released various details about the attackers.

On Monday, they released the names of two of the suspects, Omar and Muktar Said Ibrahim, 27, also known as Muktar Mohammed Said. Both came to Britain as the children of refugees, the government said.

Omar arrived from Somalia in 1992 at age 11 and has British residency, the Home Office said. Said came in 1990 from Eritrea, his family said, and officials said he was granted residency in 1992 and British citizenship in September 2004

According to Britain's Press Association, Said was part of a gang that carried out a series of muggings in the mid-1990s. He was sentenced to five years in prison in early 1996 but qualified for early release in 1998 after serving 2½ years.

Press Association said that when he was released, Said grew a beard, adopted Islamic dress and became very devout. Police are looking into whether he attended the Finsbury Park or Brixton mosques in London, once considered magnets for radical Islamic clerics, and are investigating whether he met shoe-bomber Richard Reid, Press Association said.

Reid, who failed in a 2001 attempt to blow up an airplane bound for the United States, is serving a sentence of life imprisonment in America.

Police have been trying to determine whether the failed July 21 bombings were connected to the deadly July 7 attacks.

In a related development, the body of Jean Charles de Menezes, a Brazilian mistakenly shot to death by police July 22 in London, was to be flown back to Brazil on Wednesday for burial, lawyers for his family said.

The Birmingham arrests came as police explosives experts were examining suspicious material found in a north London apartment connected to Omar and Said.

The July 21 bombs were stored in clear plastic food containers and put into dark-colored bags or backpacks. Police said those four bombs were similar to another found abandoned in a park Saturday, raising fears a fifth bomber is on the loose.

The Birmingham arrests would bring the number of people that police have said are being held in connection with the July 21 bombings to nine. Police last week arrested and were questioning five other people in relation to the botched bombings. It remained unclear if the other two being held had anything to do with the attacks.