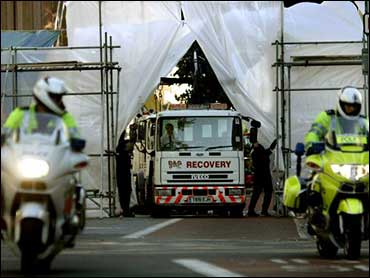 Police are investigating whether four attackers — possibly suicide bombers — died in last week's London subway and bus explosions and have arrested one suspect after a series of raids Tuesday in Leeds, a northern city with a strong Muslim community.

At least three of the suspected bombers came from the West Yorkshire region, which includes Leeds, said Peter Clarke, head of the Metropolitan Police anti-terrorist branch.

Closed-circuit TV video showed that all four had arrived at King's Cross station by 8:30 a.m. on Thursday, about 20 minutes before the blasts began that killed at least 52 people, Clarke said.

Meanwhile, on Tuesday, explosives were found in a car at a rail station north of London, the BBC reported, but police could not immediate confirm the report.

Police said earlier Tuesday they had shut down the rail station 30 miles north of London. Explosives experts examined a car they suspected was linked to the terrorist attacks and carried out three controlled explosions, they said.

In a Scotland Yard news conference, Clarke said police had "strong forensic and other evidence" that the man believed to have carried a bomb onto the subway train that exploded between the Aldgate and Liverpool Street stations died in the blast, and they were awaiting confirmation from the coroner. Police were trying to determine whether the other three also died in the explosions.

Police, who had been saying there was no evidence of suicide bombings, indicated that there had been a breakthrough in their inquiry.

"The investigation quite early led us to have concerns about the movements and activities of four men, three of whom came from the West Yorkshire area. We are trying to establish their movements in the run-up to last week's attacks, and specifically to establish if they all died in the explosions," Clarke said.

One of the suspects had been reported missing by his family at 10 p.m. Thursday, and some of his property was found on the double-decker bus in which 13 died, Clarke said.

"We have now been able to establish that he was joined on his journey to London by three other men," he said.

Some witness accounts suggested the bus bomber may have blundered, blowing up the wrong target and accidentally killed himself. Media reports have quoted an eyewitness who got off the crowded bus just before it exploded as saying he saw an agitated man in his 20s fiddling anxiously with something in his bag.

"Everybody is standing face-to-face and this guy kept dipping into this bag," Richard Jones, 61, of Berkshire, told the BBC.

One theory suggested the attacker may have intended to leave his bomb on the subway but was unable to board because his coconspirators had already shut the system down.

Investigators also found personal documents bearing the names of two of the other men three near seats on the Aldgate and Edgware lines. Police did not identify the men.

Acting on six warrants stemming from those developments, British soldiers blasted their way into a modest Leeds row house Tuesday to search for explosives and computers. Streets were cordoned off and about 500 people were evacuated. Hours earlier, police searched five residences elsewhere in the city.

Leeds, about 185 miles north of London, has a population of about 715,000. About 15 percent of the residents are Muslim, and many come from a tight-knit Pakistani community, mostly from Murpir, south of Islamabad. Other pockets of the community are mostly Arab, coming from a variety of countries including Syria and Saudi Arabia.

The military, including a bomb squad, carried out the controlled explosion at the row house at 11:30 a.m. so detectives could enter the home in Burley, a neighborhood where public signs in storefronts and even a Church of England community center are printed in English and Arabic.

There was no immediate word of arrests.

No one was in the house at the time of the raid, police Inspector Miles Himsworth. Detectives were scouring it for explosives and other items, possibly computers, he said.

"It's a very, very complicated investigation," Himsworth said. "It will be a very slow and very meticulous search in order that any evidence that is there can be gathered carefully."

Cordons kept bystanders about 100 yards away from the house in Burley and police helped arrange prayers scheduled at a nearby mosque to be moved to other mosques nearby, Himsworth said.

Prime Minister Tony Blair promised authorities would hunt relentlessly for the bombers. Police said their painstaking investigation was moving ahead, and warned that the death toll, which went from 49 to 52 on Monday, would rise. Some 700 were injured in the attacks; 56 of those remained hospitalized.

Blair went to City Hall on Tuesday and signed a condolence book for the victims.

"With deep condolences for all those who lost their lives and for their families who mourn and with heartfelt admiration for London, the greatest capital city in the world," Blair wrote.

The families of those missing since the bombings endured an agonizing wait for word of the fate of their loved ones.

"I need to know, I want to protect him," said Marie Fatayi-Williams, who arrived from Nigeria to find out what happened to her immigrant son, Anthony, 26. "How many tears shall we cry? How many mothers' hearts must be maimed? My heart is maimed at this moment."

The family of Michael Matsushita, a New Yorker who moved abroad in the spring of 2001, said it was likely he was dead. The 37-year-old left home Thursday to go to work and never returned.

"At this time, we've been told that there is virtually no possibility that he is alive," said David Golovner, a family spokesman. "We realize the police wouldn't have told us that unless they were certain. We have given up, basically, any sort of extravagant theories about how he might still be alive."

The names of two more victims were released Tuesday. The families of 30-year-old financial adviser Jamie Gordon and Philip Stuart Russell — whose 29th birthday would have been Monday — said the two men were on the No. 30 bus that exploded near Tavistock Square.

So far, the names of four of the dead have been released.

Forensics experts have said it could take days or weeks to identify the bodies, many of which were blown apart and would have to be identified through dental records or DNA analysis.

Ian Blair said forensic experts were scouring the tunnel where a bomb exploded aboard a Piccadilly line train, the deadliest of the four blasts. Police said they are also scrutinizing 2,500 closed-circuit TV video taken from cameras around the blast sites.

"This is the biggest crime scene in England's history," Blair said. "They still have to get underneath the carriages, and it is possible they will find more" bodies.

Help came from abroad, too, as intelligence officials and detectives from some two dozen countries — including Spanish investigators who worked on the Madrid bombings — met over the weekend to discuss leads.

Public transit officials said the number of passengers using London's vast bus and subway network, which handles 3 million people on a typical day, was back to normal Monday.

Sales of bicycles have climbed since the bombings as workers look for alternatives to public transport, the capital's biggest cycle retailer said.