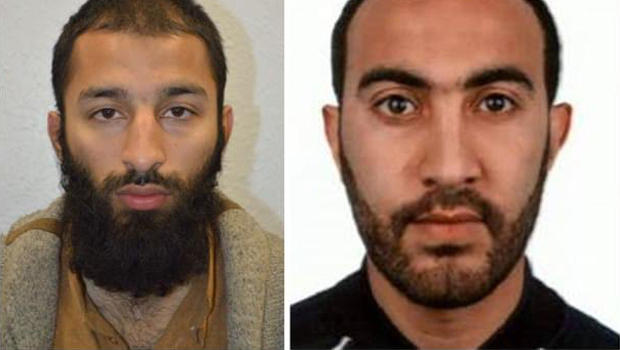 LONDON -- British police named two of the three men who left a trail of bloodshed with a van and knife attack in Central London, and appealed for the public's help Monday to learn more about their movements in the days leading up to the rampage that killed seven people and injured dozens.

Khuram Shazad Butt was a 27-year-old Pakistani-born Briton known to authorities, according to a statement issued by London police. Rachid Redouane, who had given his age as 25 or 30, was previously unknown to authorities. He claimed to be Moroccan and Libyan and had also used Elkhdar as a surname, police said.

Assistant Commissioner Mark Rowley urged the public to come forward with any information regarding the suspects.

"I would urge anyone with information about these men, their movements in the days and hours before the attack and the places they frequented to come forward," Rowley said in a statement.

The events unfolded Saturday night around 10 p.m. when a van mowed down pedestrians along the London Bridge. Three men fled the van with large knives and attacked people at bars and restaurants in nearby Borough Market, police and witnesses said.

The attack unfolded quickly, and police said officers had shot and killed the three attackers within eight minutes.

All 12 people arrested on Sunday, as part of the investigation, have now been released without charge, London police said.

The attack is shaping the final days of an election campaign, focusing attention on Prime Minister Theresa May's role in reducing the ranks of police officers.

Labour Party leader Jeremy Corbyn said he supported those calling for May to resign because of her role reducing police staffing during her tenure as home secretary, though he said the best remedy was to vote her out.

"There's an election on Thursday, that's the chance," he said, citing an "appalling" cut in police staffing levels.

"We're calling for a restoration of police numbers, and there's a call being made for her to go, because of what she's done on the police numbers."

May, under fire because of three major attacks in Britain in the last three months, said Corbyn wasn't fit to safeguard Britain's security at a time of heightened threat.

"We have given increased powers to the police to be able to deal with terrorists -- powers which Jeremy Corbyn has boasted he has always opposed," she said.

The Islamic State of Iraq and Syria (ISIS) claimed responsibility for the London attack. ISIS has often made such claims not just when it has sent attackers, but when extremists carrying out deadly plots were inspired by the group's ideology.

Most of the London Underground stations reopened in the neighborhood where the attack took place, allowing normal life and commerce to resume after more than 24 hours of lockdown. Some residents cooped up inside all day Sunday emerged from their homes for the first time since the attacks.

"We were all stuck!" said Marcia Rainford, a 58-year-old who said she was sealed into her building complex with her mother and two children.

"We got blocked in. One whole day," she said. Luckily she had a full fridge. "I always stock up!"

The sister of a missing 32-year-old man said Monday her brother is believed to have died in the attack. Melissa McMullan told Sky News that police said her brother James McMullan's bank card had been found on one of the bodies.

"While our pain will never diminish, it is important for us all to carry on with our lives in direct opposition to those who wish to destroy us and remember that hatred is the refuge of small-minded individuals and will only breed more," she said.

She said authorities are "unable to formally identify him until the coroner's report begins tomorrow." London police say they cannot confirm the names of people caught up in the attack.

It is not clear how having more police on the beat would have prevented the attack, since the men were shot dead within eight minutes, but the issue of police cuts has come back to haunt May, who served for six years at home secretary under her predecessor David Cameron before she became prime minister last year.

During that time, police numbers have dropped by roughly 20,000 officers, and the number of armed officers has fallen as well.

May said Monday that Britain's counterterrorism operations are fully funded, but London Mayor Sadiq Khan -- a Labour figure -- said cuts to police have been draconian.

"Over the last seven years, we as a city have lost 600 million pounds, about $775 million, from our budget," he said. "We have had to close police stations, sell police buildings and we've lost thousands of police staff."

The country's official terror threat level had been set at "critical" in the parlous days after the Manchester concert bombing on May 22 that killed 22 people -- reflecting a judgment that an attack might be imminent because accomplices with similar bombs might be on the loose.

It was lowered once intelligence agencies were comfortable that this wasn't the case. The London attack, carried out by three knife-wielding men in a rented van, is apparently unconnected to the Manchester bombing.

May has said the three attacks -- including one in March -- weren't connected in any operational sense but were linked by what she called the "perverted ideology" of extremist Islam.

Khan and Police Commissioner Cressida Dick toured the site of the latest attack and praised the quick police work that they said prevented further deaths.

Dick said the attack was "ghastly," but that Londoners are pulling together and refusing to be cowed by extremists.

She said providing more firearms for London police wouldn't be a sensible solution to the increased tempo of attacks, saying the strategy of having special mobile units of heavily armed officers is effective.

Khan and Dick were briefly heckled by a man who called for more police to be put on the streets.