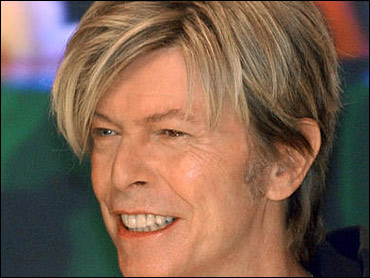 Halfway through his third song at a Norwegian music festival, an object came flying out of the crowd and hit superstar David Bowie in the eye.

It was a lollypop, and probably sent as a message of adoration since Norwegians call the sweets "Love on a Stick."

But in this case the target of the fan's affection was clearly hurt by Friday's incident, but not seriously. Bowie backed off the runway, hunched over and was assisted by his set crew.

Within moments, he was facing the crowd of 7,500 at the Norwegian Wood Festival in Oslo and he was furious.

Swearing at the unknown culprit, Bowie said only he had one good eye. The other was damaged in a childhood fight.

"Lucky you hit the bad one," Bowie said, demanding to know who threw the lollypop. No one standing the cold and drizzle came forward.

Bowie grumbled about them hiding in the crowd. Then, regaining his composure and his sense of humor, he said he was going to punish them by making the concert extra long.

Later, during what the Norwegian media called one of his best concerts ever, Bowie continued to joke about the incident. He threw one of his guitar picks into the crowd, and then asked if he'd hit someone in the eye.

Norwegian newspapers tracked down a young woman who claimed to be behind the mishap. They did not publish her name, but said she claimed it was an accident.

The artist's official home page said the eye had been checked and was not seriously injured.

As for Bowie, he held his good-natured threat of a long penalty concert and played 27 songs over nearly two hours and 20 minutes.