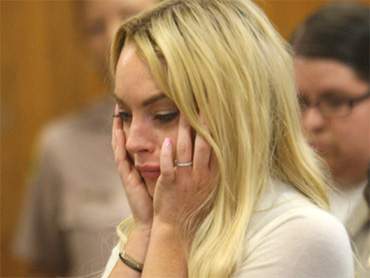 Inside a nondescript two-story building next to a busy freeway in an industrial neighborhood, far removed from Hollywood, is where Lindsay Lohan will likely spend several weeks as part of her punishment for violating her drunken driving probation.

Lohan is slated to begin her sentence Tuesday at the bleak, 16-year-old Century Regional Detention Facility in Lynwood, California, just south of downtown Los Angeles. The actress would be housed in the 2,200-bed facility's special needs unit, where she would live in isolation for her own safety.

Thanks to jail overcrowding and a state program that credits inmates for good behavior, nonviolent female misdemeanor offenders such as Lohan typically serve only about 25 percent of their sentences, according to Los Angeles County Sheriff's Department spokesman Steve Whitmore.

That means Lohan's 90-day sentence could be reduced to about three weeks and she could be out of jail in time for the premiere of "Machete," the action-thriller opening Sept. 3 that stars Lohan as a nun.

It won't be Lohan's first time inside the lockup, which has served as Los Angeles County's only all-female jail since 2006. The actress spent about 84 minutes there in 2007 for a drunken driving offense, reduced from her already trimmed daylong sentence because of what officicals said was an overpopulation issue. She was searched, fingerprinted and placed in a holding cell but allowed to keep wearing her street clothes.

This time, with a much longer sentence, the 24-year-old "Mean Girls" and "Georgia Rule" star will most certainly have to trade her designer clothes for a jail-issued orange jumpsuit. Lohan also will be asked to arrive empty-handed and to surrender any jewelry.

Besides the jumpsuit, Lohan will also be given a set of simple toiletries that all inmates receive: toothbrush, toothpaste, soap, comb, deodorant, shampoo and shaving implements. Paris Hilton received one for her own secluded 23-day stay in 2007 for reckless driving charges, according to Whitmore.

Like other inmates in the special-needs area, Lohan will be served her meals in her cell and will be allowed outside the 12-foot-by-8-foot space for at least an hour each day. With only a public pay phone at her disposal, the frequent micro-blogger will likely be silent on Twitter during her incarceration. Cell phones and computers aren't allowed inside.

Alexis Neiers, the reality TV starlet from E!'s "Pretty Wild," is currently serving a six-month sentence in Lynwood after being implicated in a break-in at Orlando Bloom's home. Neiers' mother, Andrea Arlington, has criticized the jail's conditions on Twitter, suggesting the water made her daughter sick and saying that Neiers wasn't receiving items ordered from the commissary.

Neiers' lawyer, Jeffrey Rubenstein, said the 19-year-old aspiring model had a difficult time at first adjusting to her solitary life, from eating "really bad food" like noodles and apples to being woken up throughout the night. Rubenstein, who visited Neiers last Tuesday, said the folks inside the facility are buzzing about the potential arrival of Lohan.
Other celebs who have been housed at the jail include Daryl Hannah, who spent a few hours there in 2006 after being picked up for trespassing during a tree-sitting demonstration. Nicole Richie and Khloe Kardashian both spent less than a day there in 2007 and 2008 for their respective drunken driving charges.

Michelle Rodriguez has served time in Lynwood twice. The "Lost" actress showed up in 2006 to complete a 60-day sentence for violating her probation following a drunken driving arrest but was released after a few hours because the jail was overcrowded. She returned in 2007 for a 180-day sentence after another probation violation. She served 18 days.

For more comfortable accommodations, Lohan could petition the court to "pay to stay" in one of about a dozen smaller jails, such as those located in nearby Beverly Hills, Burbank or Glendale, home of the 5-year-old jail where a judge allowed Kiefer Sutherland to serve 48 days in 2007 and 2008 for his drunken driving charge because of county jail overcrowding.

But there would be trade-offs: If approved by her sentencing judge, Lohan's stay at one of these suburban jails could cost her between $75 and $120 a day. And she would probably serve more of her 90-day sentence at these facilities because they aren't as overcrowded as Lynwood.