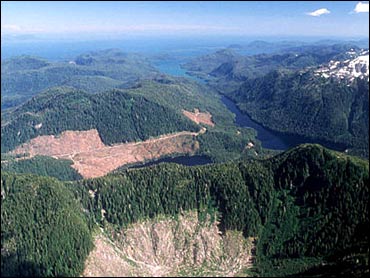 Some 300,000 acres in the nation's largest forest will be opened to logging and road building under a Bush administration decision that supporters believe will revive Alaska's timber industry but activists fear will devastate the forest.

The Bush administration said Tuesday it will allow 3 percent of the Tongass National Forest's 9.3 million acres to have roads built on them and perhaps opened to use by the timber industry. The Tongass - one of the country's last temperate rain forests - covers 16.8 million acres.

The acres were originally made off-limits to road-building by former President Clinton.

Environmental advocates called the decision a "holiday gift" to an industry that has backed Bush in his presidential campaigns. They worry the move will devastate the Tongass.

"In fact, the timber industry just might get everything on its list this holiday season because (Tuesday's) announcement comes just after President Bush signed a bill that increases logging under the guise of fighting forest fires," said Tiernan Sittenfeld of the U.S. Public Interest Research Group, an advocacy group.

She was referring to a bill Bush signed earlier this month that eases restrictions on tree-cutting and brush-clearing in national forests to reduce the risk of wildfires.

Sen. Lisa Murkowski, R-Alaska, said the decision on the Tongass "paves the way for a resumption of some wood harvest for the Tongass, enough to support the surviving timber industry in Southeast Alaska."

The decision builds on the Bush administration's decision in June to settle a lawsuit by Alaska that challenged the roadless rule, a Clinton-era ban on 58.5-milion acres of national forests.

As part of that settlement, the administration agreed to exempt the Tongass and Chugach national forests from its planned revisions to the roadless rule.

But Mark Rey, the Agriculture Department undersecretary in charge of forest policy, said that as a practical matter, 95 percent of the roadless areas in the Tongass would remain off-limits to development.

That's because the administration - while reversing the ban on road-building in Alaska's forests that Clinton adopted just before leaving office in 2001 - is reverting to an earlier Clinton plan in 1997 that set special management rules for Alaskan forests.

"So we have maintained the faith with the Clinton administration's Tongass land management plan, based on the best science available," Rey said. "We are providing for the protection of 95 percent of the land and excluding a small amount for a sustainable forest products industry in Alaska."

The roadless rule, imposed in January 2001, applies to nearly a third of the national forests. It was struck down in July by a federal district judge in Wyoming and currently is before the 10th U.S. Circuit Court of Appeals.

Forest Service officials said their decision to exempt the Tongass from the roadless rule "maintains the balance for roadless area protection" while providing opportunities for sustainable economic development.