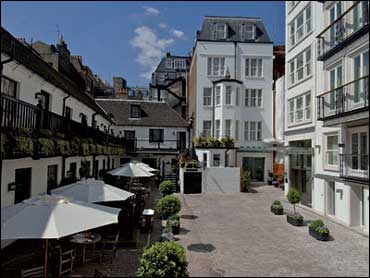 (Stafford Hotel)
Another great discovery that I made during a recent visit to London (besides a sensational cream puff at Fortnum & Mason that I discovered, and then ate), was the Stafford Hotel, which is tucked away on quiet, elegant St. James Place in Westminster, just around the corner from where Princes William and Harry live at St. James Palace. It is a small, boutique hotel of only 105 rooms and suites, with public rooms that are little, old-fashioned English drawing rooms and a sensational watering hole called The American Bar that serves a right proper martini. Baseball caps from just about every pro team and American college, football helmets and lots of photos line the walls and ceiling.

As Stuart Procter, the practically perfect General Manager said, the hotel just last May added 26 suites in the Royal Mews courtyard, and spent a hefty 26 million pounds (about $50 million) in so doing. The results are the most quiet, peaceful rooms in London, with views onto the courtyard and stationery printed up for guests that announces that the Stafford is "my residence whilst in London."

On one delirious evening, Stuart – who is the antithesis of a stuffy hotelier and could and did drink the rest of us under the table -- hosted a group of us at dinner in the 17th-century underground wine cellar that was reportedly the site of Prince Charles's bachelor party (now that must have been a rowdy event). Frank Laino, the hotel's concierge who has won awards as the best concierge in the world, was on hand to talk about scoring tickets for London events (Wimbledon and West End musicals a snap; football and smaller theaters with hit shows not so easy). The hotel was an American officers' mess during World War II, and the wine cellar has subterranean passages with wartime memorabilia. Next door is Spencer House, the family home of the late Diana, Princess of Wales, and Rupert Murdoch keeps an apartment across the street. The young princes occasionally pop by the American Bar with their friends.

Well, that's good enough for me. The Stafford is now my residence whilst in London. My stationery says so. Check it out next time you cross the pond.

The Murder of Anna Repkina

Why Hurricane Ian could disrupt air travel for the next week

Using art to create a unique home from home experience
Thanks for reading CBS NEWS.
Create your free account or log in
for more features.
View CBS News In
CBS News App Open
Chrome Safari Continue
Be the first to know
Get browser notifications for breaking news, live events, and exclusive reporting.