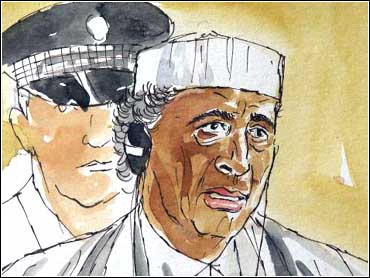 The Libyan sentenced to life in prison for the 1988 Pan Am bombing reaffirmed his innocence and said in an interview published Monday that he is fasting to be closer to God.

"God is my witness that I am innocent, I have never committed any crime and I have no connection to this issue," Abdel Basset Ali al-Megrahi said in an interview with the Arabic daily Asharq Al-Awsat from his prison in the Netherlands.

Scottish judges in the nine-month trial ruled Jan. 31 that al-Megrahi planted the bomb in a suitcase from the Mediterranean island of Malta. The bombing of New York-bound Flight 103 killed 270 people.

"I swear to God that I have never seen any suitcase nor did I put any suitcase (on the plane)," the newspaper quoted al-Megrahi as saying.

Al-Megrahi's alleged accomplice, Lamen Khalifa Fhimah, was acquitted and returned to a hero's welcome in Libya. Al-Megrahi, meanwhile, has appealed and has six weeks to submit a detailed argument.

The London-based newspaper quoted al-Megrahi as denying earlier media reports that he was on a hunger strike, saying he was fasting "to be closer to God to lift the injustice done to him."

Muslims usually fast from sunrise to sunset during the holy month of Ramadan, but some fast extra days during the year.

Al-Megrahi also challenged the testimony of a Maltese shopkeeper who identified him as the man who purchased the clothes wrapped around the bomb.

"This Maltese man, since his first testimony, said I was 50 years old. At that time I was in my 30s. He said I was black, then he changed his testimony before the court saying I was not black," al-Megrahi said.