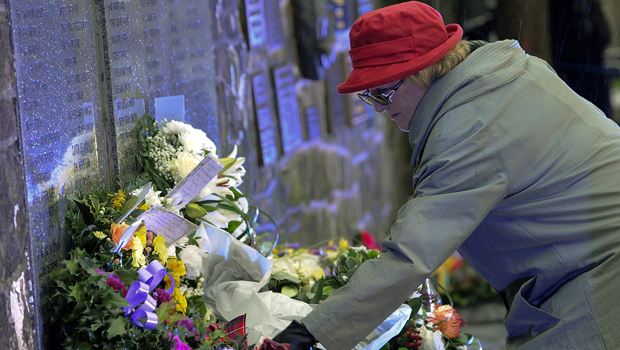 ARLINGTON, Va. -- Families of some of the 270 people who died in the bombing of an airliner over Scotland 25 years ago gathered Saturday for memorial services in the U.S. and Britain.

Bagpipes played and wreaths were laid in the Scottish town of Lockerbie and services were being held at London's Westminster Abbey. In the United States, hundreds gathered at a service at Virginia's Arlington National Cemetery where U.S. Attorney General Eric Holder spoke.

Pan Am 103, which was bound for New York, exploded over Lockerbie less than an hour after takeoff from London on Dec. 21, 1988. Many of the victims were American college students flying home for Christmas, including 35 Syracuse University students participating in a study abroad program. The attack, caused by a bomb packed into a suitcase, remains the deadliest act of terror in Britain.

Whitney Davis lost her sister Shannon, a Syracuse student, and other friends in the explosion.

"I was angry. I was in disbelief. Mom was in shock, my brother was not saying much and I just was throwing snowballs at the sky and wondering how this could have happened," said Davis, of Bend, Ore., who brought her daughter to the memorial in Virginia.

Armen Khatchaturian, of Glen Ridge, N.J., attended the service in Virginia to honor his close college friend and former Fairleigh Dickinson fraternity brother, Elia Stratis, one of the victims. The service took place near a cairn made of 270 stones that serve as the official U.S. memorial to the bombing.

"It's indescribable what you go through when you hear something like that. It's reality that hits you square in the face, but the mind just can't process it. You can't believe it," said Khatchaturian, 67.

He said he had a dream a few weeks ago that he was back.

"My mind is still not processing, not accepting that he is gone," he said.

In Scotland, officials including Scottish leader Alex Salmond and relatives of victims gathered at Lockerbie's Dryfesdale Cemetery on Saturday.

"In my heart, to me this is home and there was no other place I felt I should be on this very sad and special occasion," said Jane Schultz, who lost her 20-year-old son, Thomas. "It's nice and peaceful and it's where Thomas was, so it's like coming home."

George Stobbs was Lockerbie's senior police inspector and among the first responders on the scene. Now 79 and retired, he's committed to keeping the memory of Lockerbie alive.

"There's a lot of older people who have either moved away or passed on," Stobbs told CBS News' Peter Greenberg, "and the younger generation, although they don't want to forget it, they don't know a lot about it."

Stobbs thinks they should.

"Because I think it's something that should never be forgotten," Stobbs said.

Syracuse was also holding a public memorial service in a campus chapel as well as a procession to the university's Wall of Remembrance.

To help keep Lockerbie in the heart of its youth, an annual scholarship has been established for two of Lockerbie's students to study at Syracuse University, where earlier this year the Pam Am 103 Archives launched an ambitious project to record the oral histories of many of those who witnessed the bombing.

"It gave a number of people an opportunity to speak that never had that chance before," Pan Am Flight 103 archivist Edward Galvin told Greenberg.

One man - former Libyan intelligence official Abdel Baset al-Megrahi - was convicted of the bombing. He was given a life sentence, but Scottish authorities released him on humanitarian grounds in 2009 when he was diagnosed with prostate cancer. He died in Tripoli last year.

Many questions remain unanswered about the attack, but the governments of Britain, the U.S. and Libya on Saturday issued a joint statement saying they will cooperate to reveal "the full facts" of the case.

"We are striving to further deepen our co-operation and welcome the visit by U.K. and U.S. investigators to Libya in the near future to discuss all aspects of that co-operation, including sharing of information and documents and access to witnesses," the statement read.