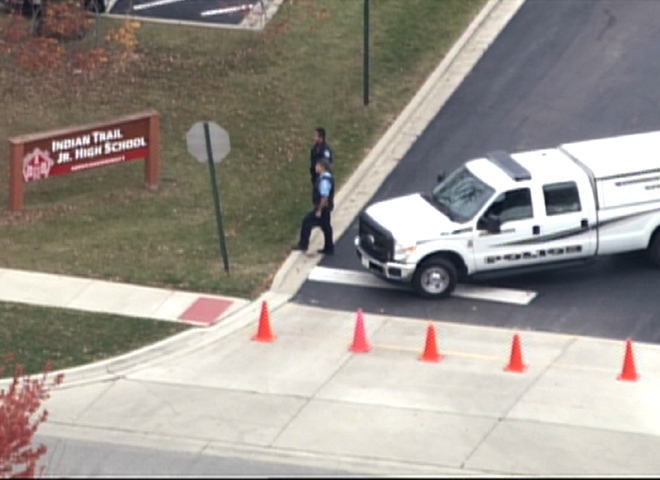 Two suburban Chicago schools were locked down for several hours Friday after a female student was found restrained in a bathroom, CBS Chicago reported.

Indian Trail Junior High and nearby Army Trail Elementary were locked down after the junior high student was discovered. The student was transported to the hospital, and officials declined to offer details on the incident. Police were reportedly reviewing surveillance video.

A message posted on the website of Addison Elementary School District 4 said police conducted a "thorough and complete search" of Indian Trail and Army Trail and did not find any suspicious individuals.

"The police are continuing to interview possible witnesses to complete their investigation," the message from Superintendent John Langton said. "The decision has been made to lift the lock down and return to normal activities."

The message was released to families through an all-call telephone system at 1:30 p.m. local time, the school district's website said.

Earlier Friday, a message from Langton said a suspicious person was reported at Indian Trail Junior High, prompting school officials to initiate a "hard lock down" of Indian Trail and Army Trail.

According to CBS station WBBM, about 15 to 20 officers and a police dog investigated the report.

He said that the lockdown would be lifted as soon as the canine unit finished its search.

Parents were seen picking up children at the elementary school as of noon Friday, and students were reportedly released from the junior high school at 1:30 p.m., CBS Chicago reported.