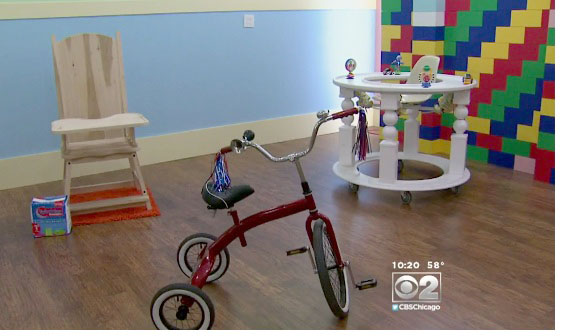 Dozens of residents showed up at village hall Tuesday night, calling for the business to be shut down or moved.

However, officials said they had no legal basis to bar the business, Tykables, which includes features such as a seven-foot crib, an over-sized high chair and adult-sized playpen.

"Things for people to come and play, take pictures with. Not everybody has access to a nursery," the owner says in a YouTube video.

The owner of the store on Northwest Highway said the primary focus of the business is selling adult diapers for medical needs and for "ABDL" or "Adult Baby Diaper Lovers," some with baby or sexual fetishes.

Residents, however, said what's going on inside the store has no place near schools and homes.

"It's hard for us to swallow in this community," one concerned resident said at the village hall.

"He's getting his party go in there, and we're supposed to sit back and watch," another resident complained.

The doors are locked at the store and customers can only enter by appointment. White panels cover the windows, for privacy.

"They're not having sex with their diapers on, they're having people feed them and act like a baby," explained one resident at the meeting.

"It's a business that many people find at best distasteful, but that is legal," said a village official at the meeting.

The village is investigating whether the store owner lied on the business application.

However, the village attorney said civil rights laws may protect against any action against the business.