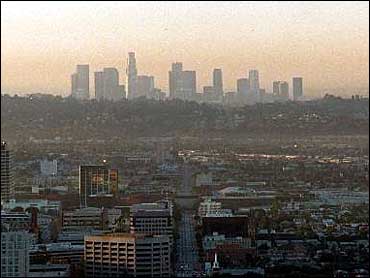 The Supreme Court ruled Wednesday that a Southern California agency may have gone too far in imposing its own antismog rules for city buses, airport shuttles and other vehicles.

Justices, on a 8-1 vote, sided with oil companies and diesel engine manufacturers who claimed that local pollution rules conflict with national standards.

The San Francisco-based 9th U.S. Circuit Court of Appeals upheld the tougher local rules, but the decision was voided by the high court. The Supreme Court sent the case back to California to consider the issues.

Seth Waxman, representing the South Coast Air Quality Management District, told justices the rules don't conflict with federal regulations because they do not force manufacturers to change emission standards. They merely direct fleet operators to buy cleaner-burning vehicles that are already on the market, he said in January.

Washington lawyer Carter Phillips, on behalf of the Engine Manufacturers Association, had argued that the justices "have to consider the possibility that all 50 states or every local jurisdiction could follow suit" if the local district gets to set its own rules.

Justice Antonin Scalia, writing for the court, agreed that the emissions rules appear to blocked by the federal Clean Air Act.

"If one state or political subdivision may enact such rules, then so may any other; and the end result would undo Congress's carefully calibrated regulatory scheme," he wrote.

Justice David H. Souter filed the only dissent. Souter, of New Hampshire, said he disagreed that the Clean Air Act "prohibits one of the most polluted regions in the United States from requiring private fleet operators to buy clean engines that are readily available on the commercial market."

The rules apply to Los Angeles, San Bernardino, Riverside and Orange counties, which together have the nation's worst air-quality problem. The restrictions were imposed in 2000 and apply to fleets of vehicles such as buses, waste haulers and others.

The Clean Air Act gives states some authority to set their own rules. At issue in Wednesday's case were local standards.